Leaf peeping is an autumn activity in areas where foliage changes colors. Leaf peepers are those who participate in photographing and viewing the fall foliage.

Like everyone who immigrates to Canada from the warmer climates waits for their first glimpse of snow, I too awaited the arrival of winter ever since I landed in Canada. However, I was caught unaware by the magnificence that is Fall. The colours change beautifully, the whole forest turns a brilliant hue of orange, yellow and red, and if you happen to fly above the forest you would think it had caught on fire!

I didn't happen to go out much this year for Fall photography due to various commitments, but did happen to have my camera with me for a couple of snaps while I waited for the wife near my workplace. I plan to do some more tomorrow, so perhaps this post will be updated.

A fallen leaf on the pavement really starts to symbolize in Canada that winter is not far away! 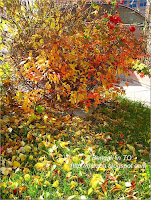 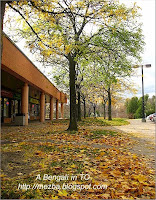 Thanksgiving Day is a North American tradition. In olden days, it was a time to give thanks for the harvest and express gratitude in general. Today, it is a holiday celebrated primarily in the United States and Canada. Families gather together, a large bird (turkey) is cooked, and it's a holiday for family reunions and joy.

Our Thanksgiving in Canada occurs much earlier than the US one. This year it was on the 12th of October. When we first moved here, it was very difficult to find a halal turkey. Either you had to go to a farm and slaughter one yourself, or you had to go to the Jewish corner to get a kosher turkey. Soon, it started to appear at select No Frills and Food Basic stores. Now it's very commonly available, and many halal meat stores have it. So our job of procuring a halal turkey has gotten much easier.

Last year, we got freshly slaughtered turkey delivered from the farm, and it was cooked immediately, and was really yummy. This year, the farm wasn't delivering to our area, so we got one from the store.

You have to let the turkey thaw on its own. Ours was a 13 lb turkey, so it took a day to thaw!

The next job is to thoroughly clean the turkey.

After it's washed, the turkey will be marinated with various stuff, and then placed in the oven.

While it's being cooked (takes 2-3 hours), one prepares other types of feast (after all, you need to show you have a LOT to be thankful for!).

So I tried my hand at making pizza.

It turned out somewhat round!

I also had some dough and toppings left over, so that made the 'left over' pizza!

This was how that turned out.


Of course, the evening is not complete without some dessert! We made muffins.

Meanwhile, as all this is being done and family members gather around the dinner table, our turkey is now done.

Too bad it was devoured before we thought of taking its picture!

I think this lady should be banned in Canada. She has nothing to do with the Islamic faith, and she represents a mode of control over female (as well as male) Canadians. She is a political symbol, a relic of the medieval times and a culture that is from a foreign land. 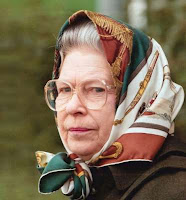 Of course if you read my satire closely you will see I am almost using the exact words Tarek Fatah uses in his National Post article, as well as the Muslim Canadian Congress in their press statement.

Recently there's a big hullabaloo in Toronto because not only did some Shiekh in Azhar University call for banning the niqab, the Muslim Canadian Congress, Tarek Fatah's former organization, called on the Canadian government to ban the niqab in Canada, saying it's not part of Islam.

Now the media is playing it up but they should do their homework. Hardly any Muslim in Canada listens to Tarek Fatah or his MCC. No one cares about them. On every position their views are so out of whack with the general Muslim populace that they can hardly claim to speak for the average Muslim Canadian.

Second, the idea that potential bank robbers can use the niqab to do a bank robbery and not be identified is present in Fatah's article. To date, there's ONE such robbery (and it was a man!). On the other hand, countless bank robberies have been performed in shirts and pants. They cover a part of a person's identity too! Let's ban shirts and pants.

While we are at it, no one should enter a bank wearing a sun glass. It hides your eyes. Also, in the winter, you cannot wear a scarf around your neck or a monkey cap, even if it is -40 outside. You MAY rob a bank, I don't know. I also find the idea of cycle helmets, especially motorcycle helmets, offensive. I can't see your eyes if you are riding a motorbike on the road! How can I make an eye contact, as referred to in my G1 manual? A motorcycle helmet is preventing me from following the law, as well as concealing your identity, so let's ban that as well.

Finally, when I go skiing, I don't want anyone to wear a ski mask, ski helmet and ski goggles. I can't see who you are when you are skiing. What if you bump into me, how do I recognize you? There's a bank at the ski resort, what if you rob it?

I think we should ban stupid people.
Posted by mezba at 5:03 pm 21 comments:

Toronto held its third all night art festival called Nuit Blanche this Saturday, well into the morning of Sunday. I decided to explore the art scene in the city. After walking for four hours, I decided it was very ... interesting.

First up was city hall, where they set up a Light Machine. 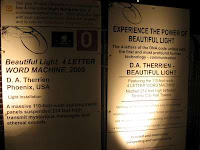 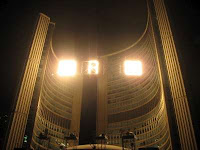 I don't know what it meant, but it seemed very popular. Lots of people were around to see the letters change. 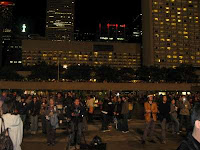 Some exhibits later we came across one that promised ghostly spectres would arise from the ground to recite deadly premonitions (or something to that effect). Well, at least they didn't disappoint. 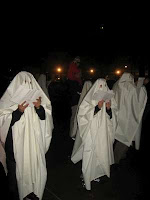 One cool exhibit (and what I thought was real art) was one exhibit that let people paint whatever they want using a light pen, and it was projected on the side of the huge building near Ryerson University. 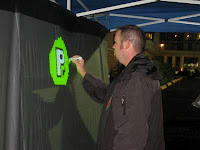 Well this guy decided to have a little fun making the Public Green P Parking symbol that led people to think there was a parking garage there, 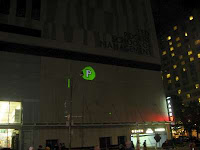 and that it was Free Parking! 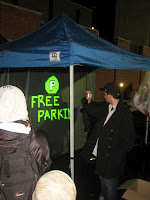 Thankfully the street was closed to traffic else we would have had a traffic jam!

There was this slide outside the Toronto Stock Exchange. It's supposed to represent the wild slide the market had undergone in the last year.

The weirdest, and freakiest exhibit was the Witch's Cradle. Participants were blindfolded, kept waiting for sometime, then led to a 'bag' that folded around them and then lifted up and was swinging gently from side to side. 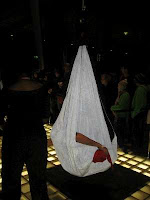 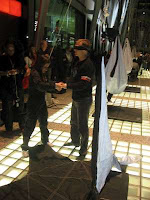 I read the explanation and I still don't know what it meant!

We went down all the way to Front St., and Pinball Clement (Argonaut coach) and a couple of his people were there, meeting and greeting people! We went all the way up to University of Toronto and then on Bloor St. before heading home.

One thing I got to think, even though some of the stuff was just plain weird, it was great to be out in the city at night and it was great to see what creative people could come up with. Creativity, and freedom of expression, great way to stimulate thinking and keep a society progressive.