What is happening in Nova Scotia ? Important for us to know as Canadians.

The French Connection and its Inferiority Complex

Let us talk about France. This is a country that is at war with its own citizens who are Muslim. Previously, this same "secular" mindset was at war with Christianity, a fact they conveniently ignore.

This is France today. This is where a teacher feels it's perfectly fine to tell a group of children "Here, I am going to show you some cartoons of the person you hold holy".
Yes, I condemn his killing, but I also condemn France in general. And France has the bigger share of the blame. 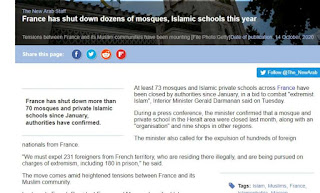