(these are not necessarily from hadith or sunnah or religion, but also from my common sense)

1. If you are collecting the meat from a butcher, there will be people on the day of Eid at the butcher asking you for meat as charity. Do not question their integrity (I am not aware of the Prophet Muhammad (peace be upon him) ever investigating the financial well being of a person asking him for charity). Just donate a little meat to them. Because of the refugee crisis in the USA and the world, there are a lot of needy people in and around Toronto.


2. When visiting a house, do not ask "have you given a sacrifice" as you don't know their personal economical situation. They may be paying off a debt or some other expense which takes priority over the ritual sacrifice.

3. In the case that you visit a house where you KNOW the people to be financially well off and somewhat non-observant, it is OK to tell them about udhiya and sacrifice and charity, as we are asked to preach the goodness of our religion.

4. If you owe someone money for the sacrifice (say the organizer of your group) please pay it off immediately. It is not a sacrifice until YOU have paid out of your own pocket.

5. While it is not required to donate some meat for charity, it is a commonly accepted good practice.

6. Eid is one of the few visible celebrations in the Muslim community. If you do NOT celebrate it, and do not take time off work, nor imbibe the celebrations in your kids, do NOT complain when they later come to you as to why Christmas is so much better than Eid. Give gifts and money to your kids. It's sunnah.

7. If you have sacrificed a lamb, remember that the Prophet's favourite piece of meat was the shank of a lamb (as far as I am aware of). So enjoy that piece - it's sunnah!

8. Please call ahead before visiting a house. Yes, it's Eid, so guests are expected, but it is also the custom of the land to announce your visit beforehand, so the hosts can be prepared to receive you.

9. Have some common sense when posting pictures of Eid. Is it really required to post pictures from the slaughter house? We all know (or should know) where our food comes from. But our Facebook (and other social media) have friends who have fled warzones, or who are triggered by pictures of blood or otherwise. Pictures of your animal being garlanded or fed before the slaughter, for example, make much better sense.

It was about five years ago when I first read about that a total solar eclipse would occur over North America in 2017. I remember making an entry in my Google Calendar (an event 5 years then into the future! ) for August 21, 2017 - "Total Solar Eclipse, 2017, Nashville".

Yesterday morning I flew in to Nashville. Along with my brother, we had researched the city and a few places on where to see the eclipse. We did a recon, and decided on Centennial Park, right by the Parthenon. This morning, along with our family and friends, we came early in the morning and staked out a picnic spot in the park.

It was a long wait. We had cards, we had foods, and there were toilets nearby, but the sun was beating down hot and strong. It was a balmy 33 C. Many times the clouds covered the sun, leading for many of us to fear all of our planning and travelling would come to nought, but the clouds would then veer away. And right on time at 11.58 pm CDT, to huge cheers to the thousands in the park, the eclipse began! 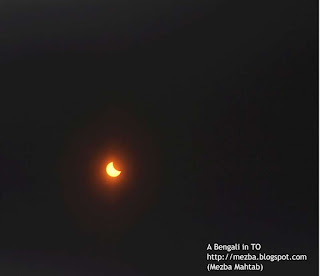 We played cards to while away the time, in between taking peeks at the sun (safely, with our eclipse protective glasses), as the sun grew smaller and smaller.

The air was noticeably starting to become cooler and cooler. I took these pictures with my camera on a tripod, and a solar filter covering the lens. 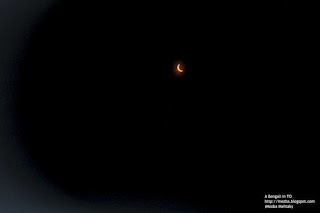 Slowly the anticipating started to grow. We packed our cards and began to wait anxiously. There were no clouds in the sky. It was clear. Totality would begin around 1.27 pm CDT. 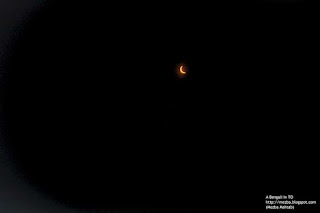 I had decided early on I wouldn't take a lot of pictures, but rather experience the moment. It was the best decision. As the air became cooler, and the sun smaller and smaller, the birds started to cry, and the crickets started to chirp. Their chirping grew louder and louder. Everyone started to cheer more passionately. It was a very exciting, surreal, amazing, superlative time. You have to experience it to know what I am talking about; it cannot be described. And right on cue, the sun disappeared! 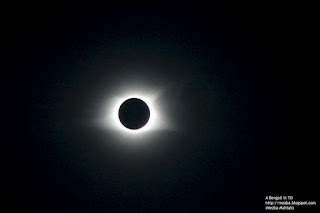 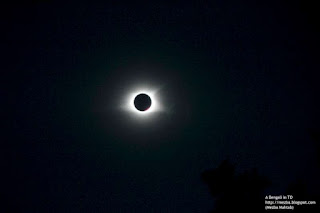 Totality lasted for about 2 minutes, and it was nothing like I had experienced before. I had only read about how day suddenly turns to night, and how it suddenly feels like you have entered another universe, and how suddenly other worldly you feel in this great cosmic dance, but nothing can compare to the real deal.

And then just like that, there was a small diamond ring in the corner, and then the sun slowly began to re-emerge, to huge cheers. 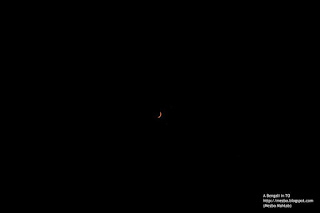 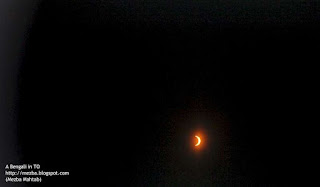 And just like that, the Great American Eclipse was now done. It was certainly something I am glad I took the initiative to plan, and experience. The next total solar eclipses in North America will be in 2021 and 2024. Hope to experience it again then!