The Corolla Has Been Sold

I did it. The Corolla has now been sold for $400. Mr Khan of Moon Autos is now the new owner of my first car. After returning from work, early, Dad and I drove to the garage to sign some papers for the ownership. 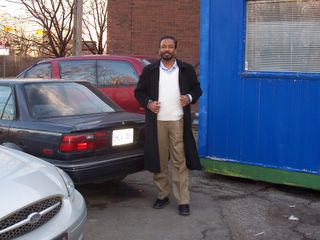 Dad with the Corolla before the sale.

It was poignant moment for me. This was my first car. This was the car on which I had unleashed my then 'raw' driving skills (at that time, skills may be too strong a word). I remember the first time I had passengers on it. Usman and his brothers, returning from Jummah. I failed to judge the stopping distance properly, and ended up with squealing hard brakes. The car managed to stop millimeters from the car in front.

I also recall the first time I was on the 401. We were returning from Etobicoke and Dad was supposed to drive us back. Instead he told me to get on the 401. Express. Middle lane. I drove all the way back at 90 km/hr. Never have I held one pose for so long. It was one of the longest 20 minutes of my life.

The first time I took a road trip with my friends. It was just Sakheb, Andy and Tahmeed, and only to Niagara Falls, but that marked the point where I became confident of driving on the highway, and confident over all.

This car held a lot of memories for me. The first time this, the first time that.... as they say, this was my first car (and I may add you never forget your first).

So, even though I did not expect you to end like this, engineless and powerless, my 1992 Toyota Corolla GLX, this one is for you.
Posted by mezba at 11:38 pm 1 comment: