A Visit to Ripley's Aquarium of Toronto

Ripley's Aquarium of Canada is a large exhibit located in downtown Toronto, just south of the CN Tower.

I had taken a day's vacation, and we decided to pay the aquarium a visit. We had heard a lot about the aquarium, mostly from friends who had been, and seen their fun pictures on Facebook. Everyone had always commented on how busy it was - so when I had an off day during the middle of the week, we decided to go.

It was a Tuesday, and we were lucky it wasn't busy at all. We could afford to go through the exhibits at our own pace, and take pictures. With a toddler in tow, this was vital. 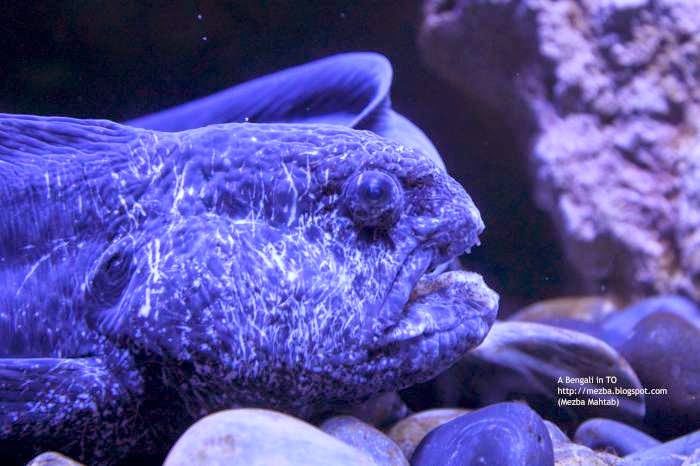 The aquarium has over 5.7 million litres of marine and freshwater habitats from across the world, and holds over 13,000 animals, from more than 450 species. 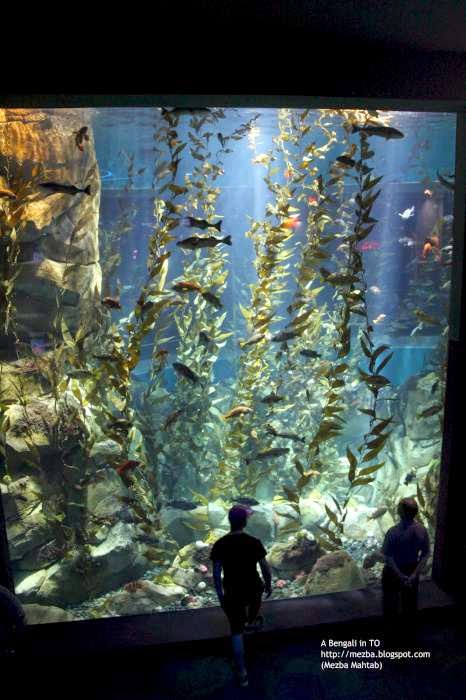 This large tank reminded me of an aquarium in Kuala Lumpur, Malaysia, but the Toronto tank was much, much bigger. What was interesting was that there was some sort of waves inside the tank, and even the tall plants swayed to and fro. 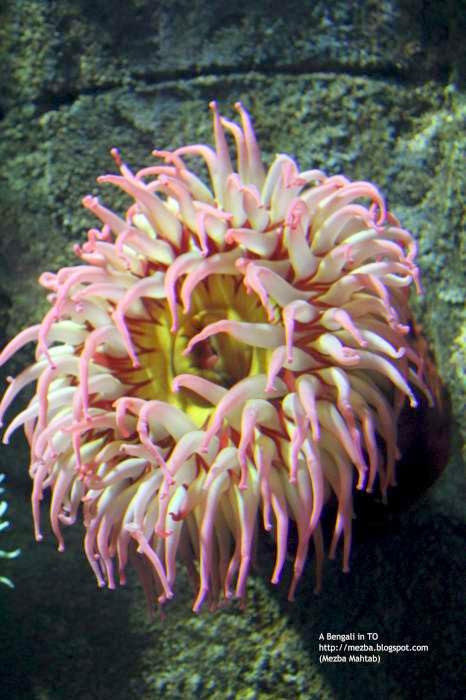 There were lots of exotic creatures on display, many of them not even fishes. We saw lobsters, crabs, sea horses and so on. Even these sea anemones had their own exhibit. One of my favourite exhibits was the Rainbow Reef, featuring animals from the Indo-Pacific region. This was the most colourful gallery in the exhibit, and pictures don't do the vibrancy of the colours justice. 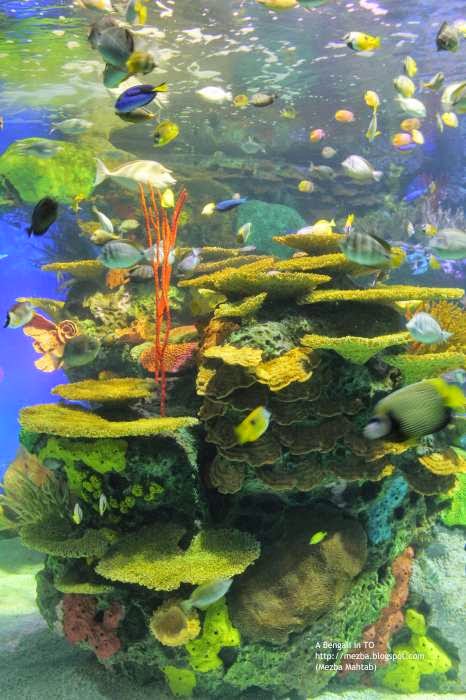 I seriously could spend hours photographing each species in this tank - this was so colourful! Here's a photography tip: if you want to photograph aquariums, dress in black. There's no reflection and you can photograph with the lens pressed against the glass. I learned this from one of my photography classes. 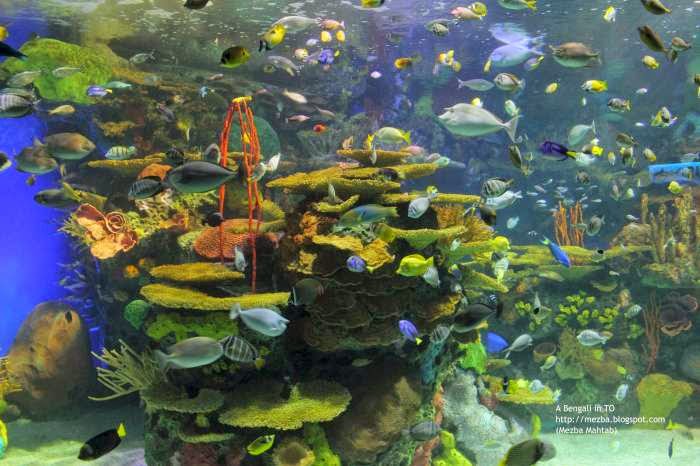 The largest tank in the aquarium is the Dangerous Lagoon, which featured an underwater tunnel with a moving side walk.
﻿ 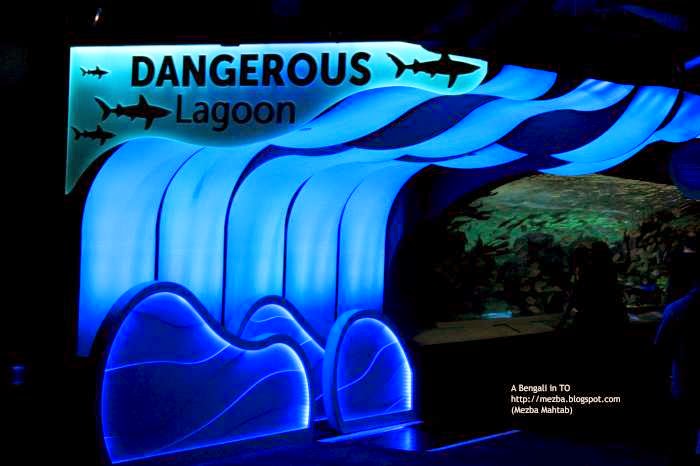 A favourite of every visitor, this exhibit featured sharks, and lots of them. There were even stingrays to whet your appetite. 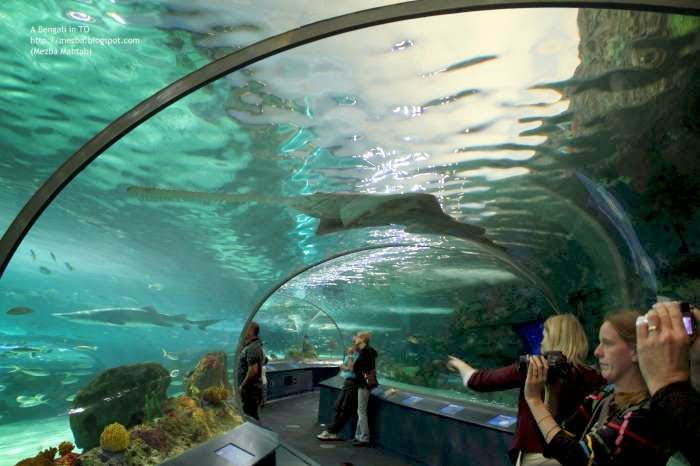 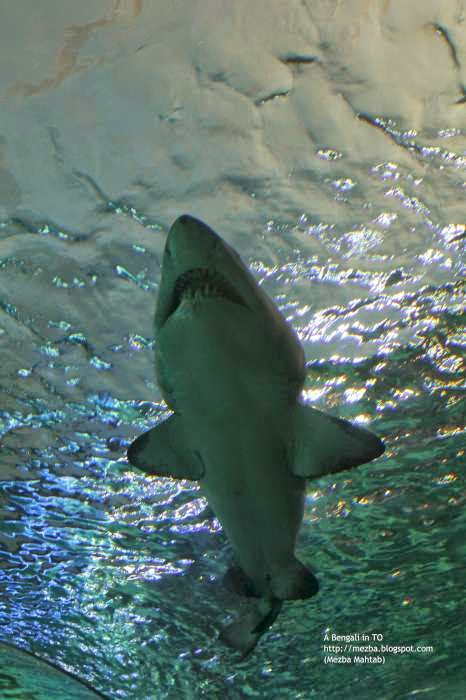 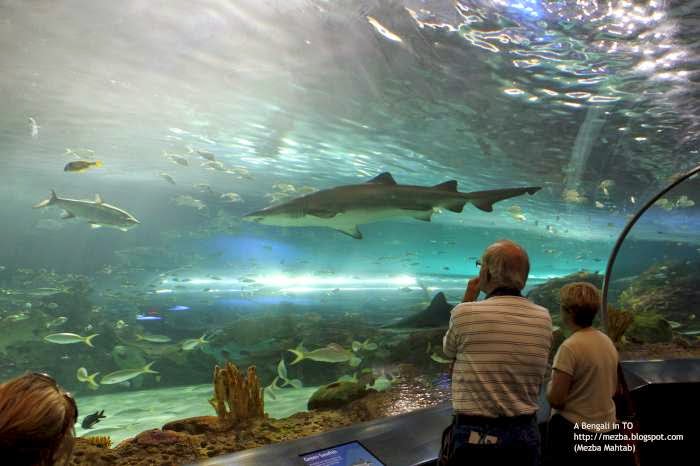 Of course nowadays no aquarium is complete without featuring fish from Finding Nemo. 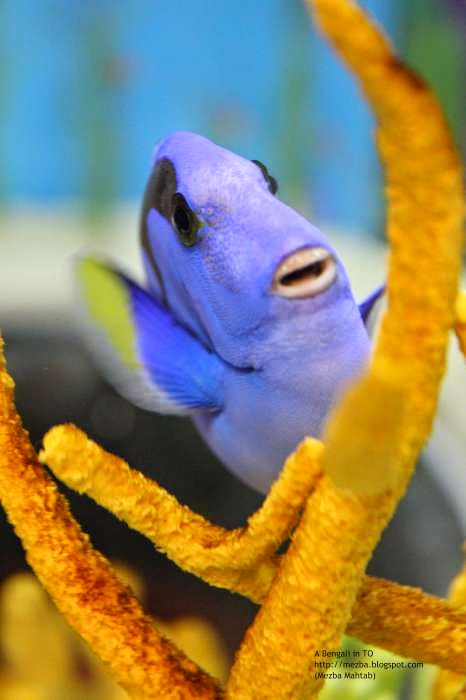 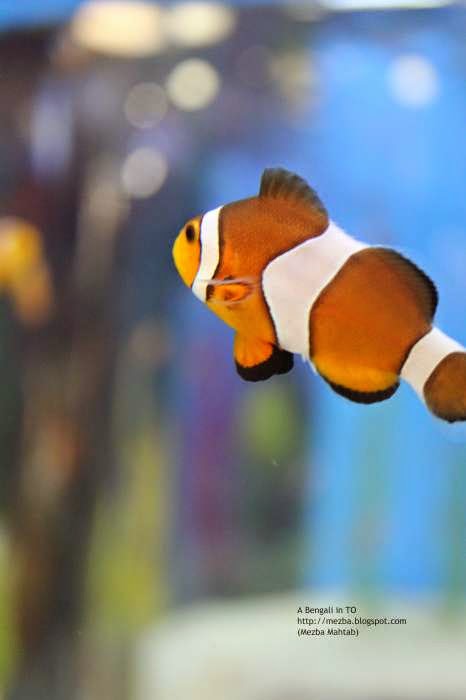 Truly it is amazing, and humbling, to think of the vast variety of life that is found in just the waters of Earth. And it is a shame that we have folks who don't even care about pollution, or the effects of their lifestyle on the ocean. I was reminded of this verse in the Quran:

Corruption has appeared throughout the land and sea  [as an outcome of] what the hands of people have  wrought;  so He may let them taste part of [the evil of] what they have done that perhaps they will return [to righteousness]. - 30:41

Indeed nowadays the results of our actions and our pollutions have started to affect the sea and fisheries - it is indeed alarming. 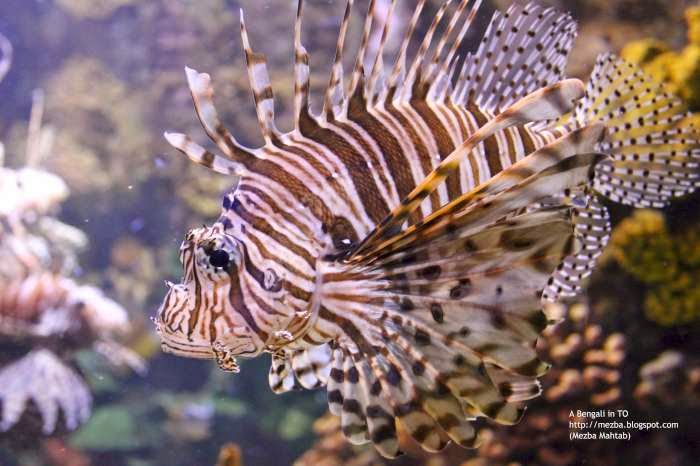 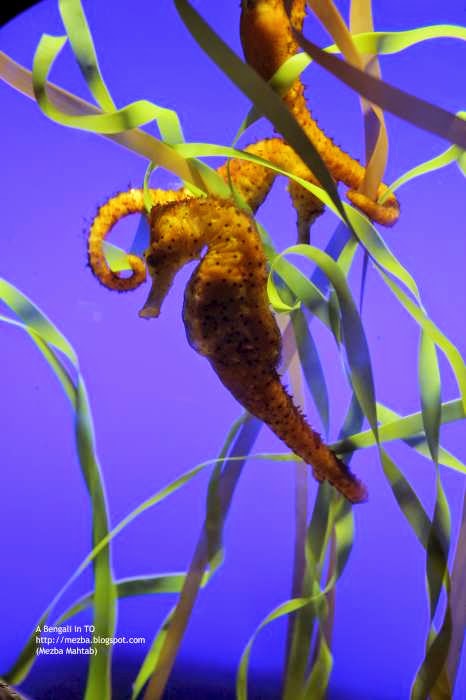 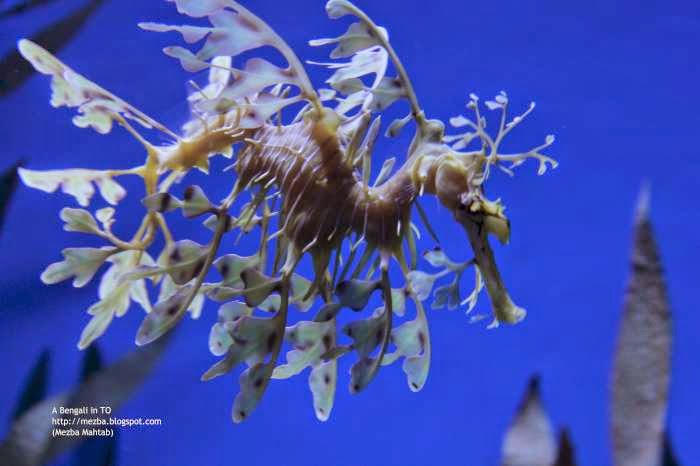 One of the cool things about Ripley's that I haven't seen elsewhere are numerous tunnels that allow you "into" the tank, so as to speak, and come face to face with a creature. 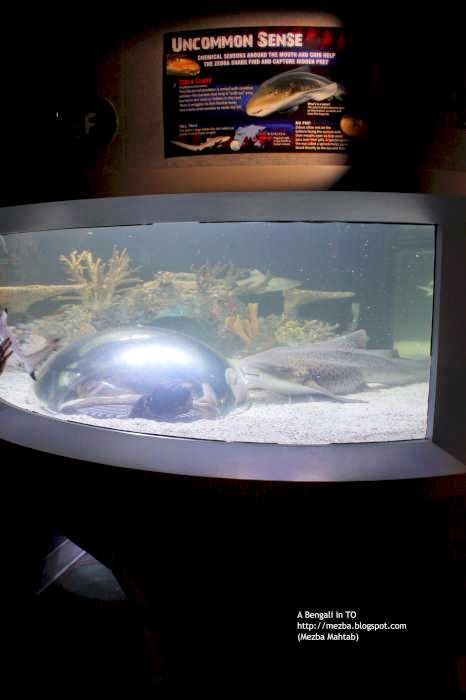 While not the biggest, the Planet Jellies exhibit has colour changing displays with five different species of jellyfish. It was just fun to sit around and try to capture these animals on the camera with a different light shining on them. 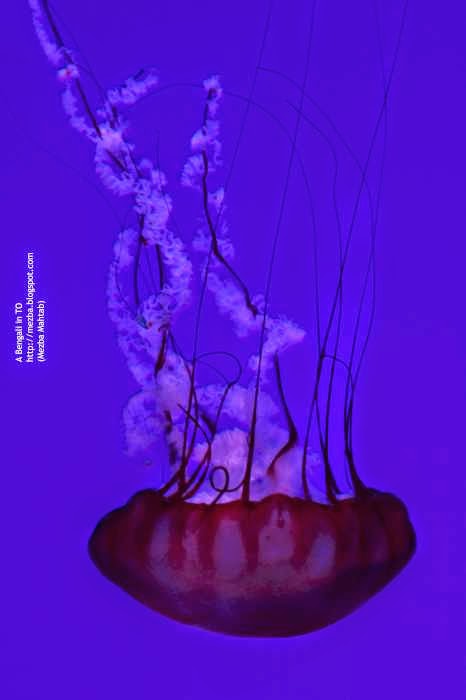 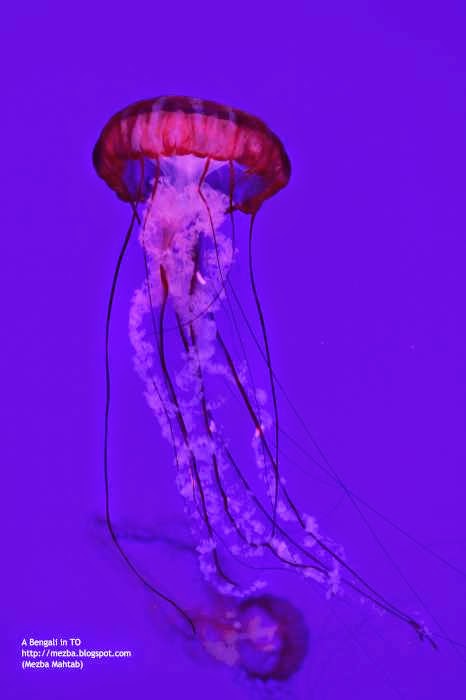 Overall, while I enjoyed my visit to the aquarium (and definitely my 2 year old son had more fun than me, walking and running all over and saying 'hi' to the 'fisheeees'), I have also visited aquariums all over the world. Particularly the Shedd aquarium in Chicago comes to mind. While the Toronto aquarium has more species and more tanks, the Chicago aquarium felt more .. grand. For $30+ with taxes, the Ripley's aquarium feels small in comparison. It took us about 2.5 hours to go through the aquarium at a leisurely pace.

I would put the Ripley's Aquarium as a must visit for any tourist to Toronto, but only if you haven't been to aquariums in Chicago or Atlanta. If you have been to one aquarium, they are all the same. It's a nice 3 hours to spend with your children though.

PS. Why was there no seafood restaurant inside the aquarium? I thought that would have been .. fitting.
Posted by mezba at 1:31 pm 1 comment:

I just read this piece on Love Inshallah.

Remember, these are the same folks that raised a huge ruckus when I said women (and men) in Islam should marry early, and there's nothing wrong if you set criteria (such as looks, age etc.) as long as you put piety first.

Now, remember that was my view, and I would like to think it's also the Islamic view (marry early). Some of these women replied on how un-Islamic that was, what was wrong with desi marriage itself, what was wrong with me etc. They kept bringing up the example of Khadija (may Allah be pleased with her) - how I wish they would really read up on her! There was even a disrespectful twitter hashtag going around ‪#‎whatwouldkhadijado‬ if you can believe it.


The world she is describing is an alien world to me.

A world where desi uncles and aunties are the chief enemy. A world where a woman is content with random dates and marriage is far down the priority list. A world where women are so insecure they clutch their husbands possessively (her words, not mine). A world where you can take a fake date to a wedding. A world where you share a magical "first" kiss a dozen times over with dudes who may not figure in your life after that one day.

It's fine if you want to live in that world. It may even fit your social values fine. Just don't call it "Islamic". And don't bring up the name of Khadija (may Allah be pleased with her) when you want to justify your lifestyle.
Posted by mezba at 11:21 am 1 comment:

Many people (especially those with a socialist / progressive mindset) start posting articles during the time of Eid ul Adha on how cruel this Eid is, the bloodbath that is animal sacrifice and why we should "reconsider animal sacrifice" or give "blankets to Syria", and so on. Here is my humble take on it.
1. Millions of animals are slaughtered just for Eid ul Adha. This is a barbaric practice.
Simple facts should be presented here. According to US Dept. of Agriculture, 45 million turkeys are killed in US alone on Thanksgiving every year. In the US in 2010, 10.2 billion animals were raised to be slaughtered as food (202 million of these were cows or pigs - mammals). So Eid is hardly the leader in numbers of animals slaughtered that many are making it out to be.
There's 1 billion Muslims. If you say 50% of these can afford to sacrifice an animal (an unusually high estimate, really!), and there's 4 people to a family, that's still only 125 million animals killed for  Eid (less than number of mammals slaughtered just in US /year) . And also take into account that it's 7 shares per cow, and the number of animals slaughtered just for Eid pales in comparison to just the regular slaughter of turkeys in US alone for Thanksgiving. So we can safely say:
More turkeys are slaughtered in US for Thanksgiving than animals in the whole of the Muslim world for Eid.
2. The slaughter of Eid animals happen in a cruel manner. They are transported in highly constrained spaces and killed in an inhumane manner.
All developed countries have slaughter houses where slaughter of animals happen in a humane fashion, following the law, and the process is monitored by the government and all meat is inspected by the appropriate authority. The same is true of all of the Gulf Arab countries, Malaysia, Turkey etc. Muslims living in the West, as well as these countries, therefore slaughter animals in a humane and proper method.
This leaves us poorer countries such as Bangladesh, Egypt etc. The fact that inhumane slaughter happens here is not being denied, but it is not an Eid or Muslim specific problem, it is a social economic problem. And numbers wise, it is (far) less than the number of animals slaughtered properly in the developed world.
It should also be remembered, many of the sheep and lamb to be slaughtered (even in poor Muslim countries) comes from New Zealand where they have been raised following the law.
3. It is better to give charity to Syria or feed the poor than to sacrifice an animal meaninglessly.
You can do whatever acts of charity you wish. Charity is good for you and it is good for your wealth and health. However, no charity can take the place of a religiously mandated act of ritual that is part of this Eid. The Prophet Muhammad (peace be upon him) always performed an animal sacrifice on Eid, and it is accepted by most Islamic scholars as sunnah muakkadah (a strongly recommended sunnah). Hanifis consider it wajib (almost obligatory).
Also, consider this. The animal sacrifice is not a mere “tradition” or "ritual", but it is a commandment from Allah.
“Whoever can afford to offer a sacrifice but does not do so, let him not approach our place or prayer.” [hadith in Musnad Ahmad and Ibn Majah.]
“Turn in prayer to your Lord and sacrifice to Him alone.” [Surah al-Kausar; 108:2]
No one is denying the need for charity, but this is one day many poor folks look forward to as they know they can eat meat on this day.
4. I disagree with Big Farming practices and think animal husbandry and livestock is not an ecologically sustainable practice.
The Prophet Muhammad (peace be upon him) did not eat meat often, but he was not a vegetarian. His favourite meat was the shank of a lamb. Eating meat is part of the sunnah, just as eating in moderation, not eating to your fill, and eating meat sparingly, etc.
A vegetarian can be a Muslim, as it is not fard (obligatory) to eat meat. But it cannot be denied that the Prophet (peace be upon him) ate meat. What is needed is for people to work together to reform Big Farm practices and find a sustainable, economically viable and morally ethical alternative farming practices - and this again is a social problem that has nothing to do with Islam or Eid.
Posted by mezba at 2:13 pm No comments: