This blog is on hiatus till January 15, 2011 - when I hope to be back after visiting some exotic locales, meeting some interesting people and spending some quality time with loved ones.

Season's greetings to everyone, and a Merry Christmas to all my Christian friends (and those who celebrate).

And to all a Happy New Year.

ps. If you want to check out the Islamic story of Christmas (yes, there is one!) visit this link.
Posted by mezba at 10:12 pm 3 comments:

Wife: "So, you know we have to buy gifts for ALL your cousins and ALL of MY cousins ..."

Me: "Don't worry, I have the Excel spread sheet ready."

Me: "Yes, everyone's name is entered, along with number of kids, number of gifts required, with currency rate and value of gift in taka and dollars."

Wife: "You know, at some point you have to go and actually buy the gifts, right?"

Man, I hate shopping. Every Christmas, I tell myself I am so glad I am not a Christian so I don't have to go out into the malls and brave the crowds to buy something. And EVERY Christmas I have to go and buy some thing.

I would rather be doing this... which actually I was last week. 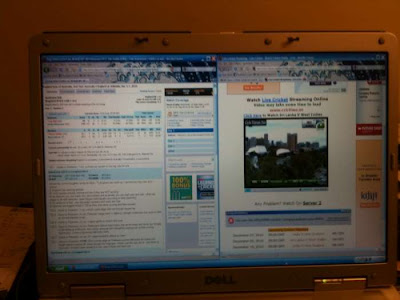 Yup, watching the Ashes, with Cricinfo running commentary on one screen and the video on the other. And yes, my comments (feedback) was actually printed by the Cricinfo people. 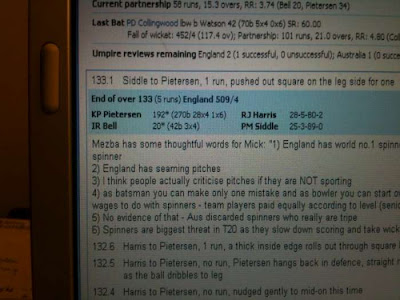 Yes, there was no point to this post ... except to remind me that I am YET to start packing, YET to confirm the hotels... YET to print the flight details ...
Posted by mezba at 1:30 am 9 comments:

Quran for Kids (with Lego bricks) - A Reminder

If you haven't already, do subscribe to my website Teaching Kids The Holy Quran. It uses toys such as Lego bricks and others to depict scenes from the verses of the Quran. There's also an RSS feed for the site.

Also, do subscribe to the Facebook page for the blog (you have to "Like" it and become a fan). I added a link to the blog on the right links bar on this site as well (under "I Also Blog At").

The new blog is visited by 50-100 people daily, and is showing a steady growth in readership stats alhamdulillah. I hope to have more fans on the Facebook page for further development of the blog.
Posted by mezba at 1:25 pm 9 comments:

Christmas At the Mall

With December here already, the festive season is upon us and the malls are all abound with Christmas (or as they say in secular terms here, Holiday) decorations. 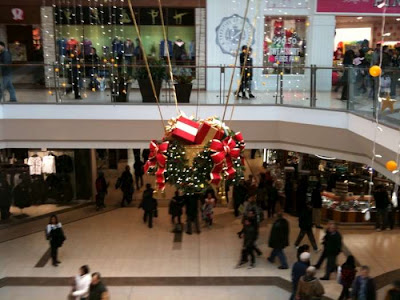 Holidays are a time to exchange gifts. 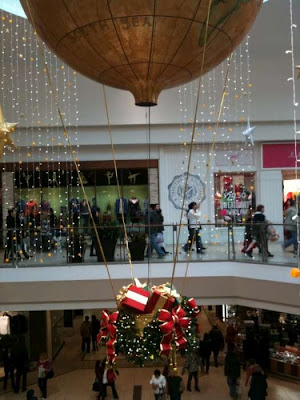 Gifts that come in a hot air balloon! 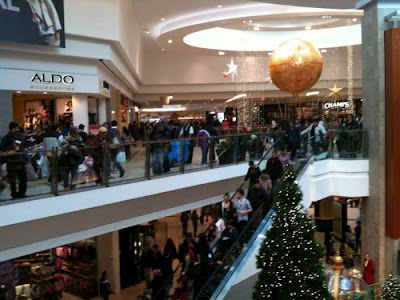 Balloons that drop into a busy mall! But who brought the gifts? 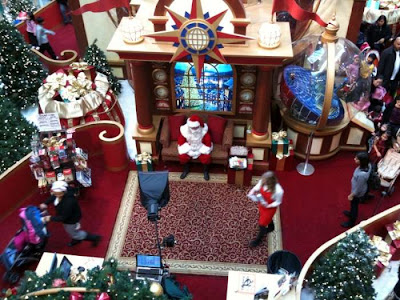 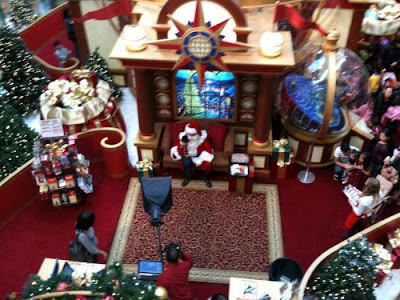 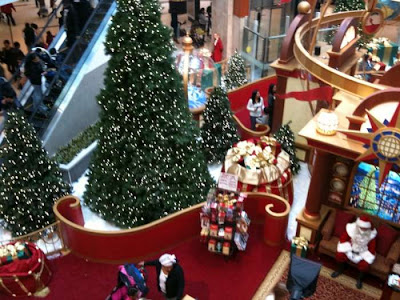 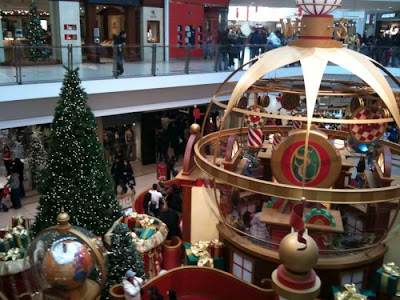 ... which is right beside Santa's Toy Workshop! I wonder where the elves are hiding. 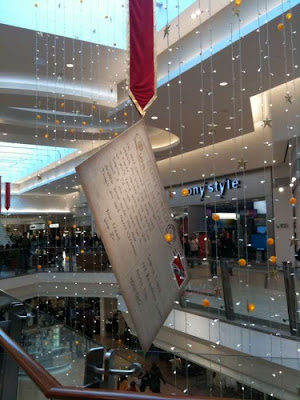 And how did Santa know to come to this mall? Why, he was invited via a letter, didn't you know!

In Defence of Arranged Marriage (Re: Natasha Fatah's CBC Article)

For those who don't know, Natasha is the daughter of Tarek Fatah. Tarek Fatah is a resident of Toronto and someone who claims to be Muslim, yet seems to find Muslims to be the root cause of many of our ills and Muslim extremism a fatal threat to the West. In a recent debate with Naheed Nenshi (Mayor of Calgary - first Muslim mayor in Canada) on Al Jazeerah, Nenshi schools Fatah and totally destroys his arguments. The debate is a must watch, with most of the fun beginning at the 8 minute mark, and Tarek Fatah being so easily outclassed. My favourite quote:

"Mr Fatah has made a career out of making this (Muslim extremism) frankly a bigger deal than it is."

In recent times, Tarek Fatah has opposed the New York mosque, been quoted by Sarah Palin, has supported the Oklahoma vote against "Shariah law" and ridiculed a man trying to prepare his will according to his religious laws. In his recent Facebook post, he recommended Asra Nomani, another "Muslim" journalist who publicly supports racial profiling of Muslims.

Natasha Fatah, his daughter (and likewise, of Indo-Pakistani descent), recently married a Caucasian man, and the pictures were posted on Mr Fatah's publicly available Facebook profile.

In one of the pictures Tarek Fatah captioned "Usually the bride is supposed to be coy and shy and quiet, but this is Canada and Natasha shows no 'haya'".

His daughter replies with "I say Bye-byea to haya!".

All of this therefore proves that not only is the Fatah household not your average Muslim household in terms of their relgious views, but also is far removed from your average Pakistani/South Asian household when it comes to customs and rituals. So given all of this, it is not surprising that Natasha Fatah should now turn her guns to another of her own customs, criticizing it (just like her father who has yet to find a single mainstream mosque or Muslim organization he likes).

In her article, Natasha Fatah goes all over the place. First, she associates South Asian culture with arranged marriages.

Arranged marriage has had roots in every corner of this planet but still holds on strongly in South Asia and even among the South Asian diaspora living in the West.

It is a fact that arranged marriages are quite common in all of Asia and Africa. My real estate agent (who is Korean) got married via arranged marriage. Many of my Arab friends found their wives via families using this custom. My Chinese team partner during my MBA studies was a product of an arranged marriage. It's not just a South Asian thing.

Ms. Fatah continues: "But that doesn't mean we still have to accept a tradition that is still not right for its times."

So, I am waiting for her to say WHY it is not right. After all, the title of her column was "The Problem with Arranged Marriage"!

She uses her cousin as an example.

He and his-now-wife had only met a handful of times before they were to marry. In many ways, they were strangers.

But I have to admit that once they did marry I could see them falling in love before my eyes.

Confused? I am too. It sounds like any marriage. There can be love. Or there can't be. You take your chances.

She then goes on to describe problems, general problems of South Asia (such as poverty and fathers saving their whole lives for their daughters' marriages) and equates them to problems with arranged marriages (which are yet to be defined).

The primary reason for arranged marriage still remains that many families want to secure wealth, property and social status for their children.

I don't know about Ms. Fatah's neck of the woods but most people I know who got married via arranged marriages did so because they felt comfortable with someone their parents and families selected. In many ways our families not only know what's best for us, but also knows what type of spouse can go with the family, their culture and their habits etc. Most children are not treated as "objects", counter to Ms. Fatah's claim. She also curiously says it's a "14th century custom". Arranged Marriages came long before the 14th century (which coincidentally is the century when Islam came forth!).

An arranged marriage avoids many pitfalls of traditional courtships. The parents have already approved the match. The family status and religion etc. already match, reducing the chances of conflict and tension. And everyone feels a part of the process, hence they try to make things amicable when there is a fight between the couple.

This is not to put down "love" marriage or other routes of marriages - all have their pluses and minuses and everyone can choose which one works for them and their life style. But I am yet to read on what exactly is the PROBLEM with arranged marriage that Ms Fatah thinks we in the West should completely abolish it!
Posted by mezba at 12:47 am 41 comments: