Usually it's the Bangladeshi musicians who stand accused of lifting (copying) songs from Bollywood or the English artists. Here, however, is a clear exception!

Here's the link to the remix of a Bangla classic written by Radha Romon Dutta in the year 1870!
http://www.youtube.com/watch?v=ssrGmOKUcM0

It's a real nice piece of music that I have listened to many a time.

Now here's the link to a Romanian song that was released in 2008.
http://www.youtube.com/watch?v=CVxPOf1phjM

You judge and tell me!

Thanks to my friend Nabil for the info.
Posted by mezba at 8:56 pm 3 comments:

A key activity in Canada is going for dessert.

Initially this was a somewhat strange activity for me. Mind you, in the Middle East, where I was brought up, it was as hot as hell, yet dessert places were hardly present in the 80s and 90s. If you wanted ice cream, you went to the local convenience store run by a guy from Kerala and got a Kwality bar.

So, in Canada, in the land of ice and snow, you actually got dressed, went to, and PAID to eat ice cream?

First, if you or a sibling is treating, you have to convince the parents to come. Typical desi father reaction would be: "What, PAY to eat ice cream? NO WAY! I will go to No Frills now, get that box, and we can mash some bananas in the blender..."

Of course then your dad would tell your mom that he is only going "for the family" and he will not eat "anything". But you notice he still eats less for dinner ...

So the family goes to the dessert place.

And then spend 20 minutes trying to explain the menu to those who haven't been there before.

"No, Moo La La is really good... and no, Forbidden Fruits doesn't have anything haram ..." 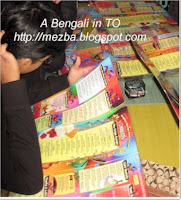 Then usually the sibling who is NOT treating decides he (or she) wants an extra order on the side because the other sibling is paying, so they will order a shake.

The food, when it comes all at once, silences everyone.

After all, no one does dessert and crepes and waffles like Canadians!

Even the parents decide it was indeed good and passes the "Parent Restaurant Test" - which is that the food is something they could not have made at home, is indeed good, and worth paying for.

If you have a wife, you will know that chocolates and ice cream for some reason is the cure to every problem.

And then the drive back home your dad thinks they should really open a place like this much closer to home.
Posted by mezba at 8:04 am 17 comments:

Since most of our travel budget was spent this year on Europe, we took a few short trips here and there near home. Ontario (the province whose capital is Toronto) is a very scenic and beautiful province. Canadians love natural surroundings and Ontario offers a lot for the hikers, climbers, campers etc. On one day, on a whim, another couple and we decided to take a trip to Tobermory, which is about three and half hours drive away from Toronto. 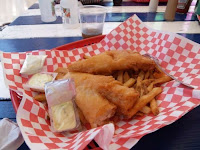 Any day at Tobermory starts with the traditional Fish 'n Chips. Man, I feel sorry for the English and their food!
After roaming around the scenic town of Tobermory, we then decided to take a cruise to Flowerpot Island. The normal cruise is 2 hours long - they take you over the ruins of boats sunk long ago and past some beautiful islands. Another express cruise to Flowerpot Island only takes about 15 minutes. 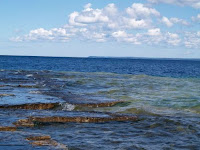 It was a beautiful day, blue sunny skies with white puffs of picturesque clouds floating over the horizon. The area is called Bruce Peninsula and it's somewhere we would love to go back again. 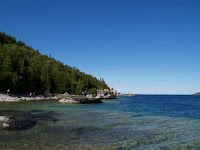 There's a couple of trails on the Flowerpot Island that leads you to the "flowerpots". There's an easy walkway cut through the forest, and there's the harder, more adventurous one over rocks and the coast line. We chose the more adventurous route (but only because we didn't know about the easy one's existence!). 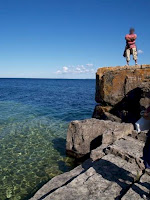 In the end, however, it was worth it. We walked beside the waves, climbed over many rock formations, had a blast dunking under waterfalls, and saw lots of wonderful (and sometimes creepy) creatures. 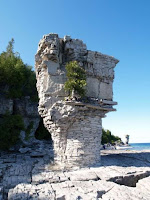 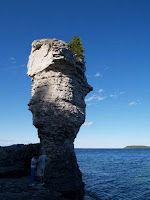 There's tons more to do on Flowerpot Island. We explored a cave, went for walk about. Families who came early in the day had a full BBQ picnic set up, while a few more adventurous folk had set up tents to camp for the night.

We took the last boat out. We would have loved to have stayed the night, and next day explore Manitoulin Island and other nearby places, but unfortunately, there were no vacancies at Tobermory, so we drove back home. As they say here, "till next time". iA!

I am filling up at a gas station in a city just outside Toronto, but to the north. It's around 11 at night, and I am eager to get home. An older white lady is also standing nearby, filling up her pickup truck. She's the only other customer outside.

Huh? All of a sudden, I hear this. I can't believe my ears, so I turn to her.

"Why don't you go back home?" She repeats in a louder voice.

I look around, and then reply, "Er, Toronto?"

"No, go back where you CAME FROM!"

"Um, Toronto?" I reply again. I am sort of enjoying this.

"Uh-huh, that would be Toronto."

She is now quite livid, and near shouting. "Why do you come to my home, and take MY job, and ... do you know after you guys came, where ALL the jobs went?"

I would have replied "Toronto" but then she had entered the truck, slammed her door and off she went.

It was my proper first brush with racism in Canada. I mean, I have heard it exists, and there are times when I have attributed behaviour to racism, but this was in your face. I was kind of glad I dealt with it in good humour and sarcasm. Perhaps the fact she was an old lady tempered it a bit. But then, why are older, rural folks more racist? I don't know.

For now, I was heading back to where I came from. Good ol' Toronto.
Posted by mezba at 8:37 am 27 comments:

Yes, I do have a lot to say (waiting for the weekend to pen some posts), but for the moment, I have news.

I have given in.