Kaal is a dumb movie

Saw Kaal last night. It was such a so-so movie. On the whole, I would grudgingly give it a 2 star. It was a such a 'could-have-been-better' movie. And that says a lot. 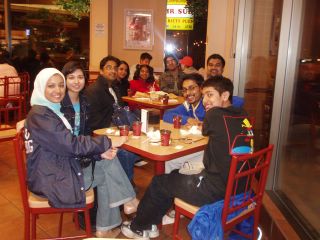 At Timmy's After Kaal

Kaal is about a group of people (which include a supposedly wildlife expert couple) who get stuck in the forest with a killer tiger. The conclusion has a supernatural bent.

This movie with tighter editing, a better script, could have been a good thriller. Instead you are never really involved with the story, the plot has too many flaws (why the experts are not following the rules of the forest, why would they not advise the ranger they are coming, and what happens to Vivek's new vehicle), the climax you can predict, and the only good part of the movie are the 5 minutes in the beginning (the 'item' song by SRK-Malaika).

All-in-all, a very disappointing movie.
Posted by mezba at 9:05 am No comments:

The BBQ that Rumana organized, which was supposed to be at Whitby park, ended up being inside Rumpa Apu's house, as it was pouring cats and dogs. Everyone had a good time, with some highlights including

Learned some now tricks for BBQ. I am getting quite good at this. If you wrap chicken in foil and put it on grill, you get a different flavor (the chicken cooks in its own juice). However I prefer the normal method. It doesn't work for steaks though.
Posted by mezba at 11:23 pm No comments:

Almost a couple of years ago, during the Toronto municipal elections, I told this joke to my co-workers:

A US senator is visited by an MP from Bangladesh. Showing him around the ranch, the visitor from Bangladesh is impressed by his more than one car, horses and a summer and winter house. He asked the senator, "I know the US Senate does not pay that much to you so you can mantain this place, how do you do it?" The senator takes him to the window, and points to a hydro dam. "You see that dam?" He asks. The Bangladeshi replies, "Yes." The senator winks, thumps his chest and announces "10%." The Bangladeshi nods in understanding.

A couple of months later the US senator is in Bangladesh, and visits this MP. The senator is completely stunned by what he sees. The MP has three houses in Uttara, two flats in Dhaka, 15 servants, three cars. His wife wears tonnes of jewellery. The senator asks the MP, "I cannot believe a third world country can pay you this much as salary, how do you do it?"

The MP takes him to the window, and points, "See that bridge?"

The senator tries and looks, but does not see a bridge. He turns to the MP, "What bridge?"

When I said this joke, everyone was laughing, before Pat said, "You know, that's just like Toronto!"

With David Miller (now mayor) running on a promise to not build the airport bridge, I was surprised at how right Pat was. Toronto spent millions in consultation fees on where and how to build this bridge, then they awarded a contractor, then the GTAA spent money on improving the island airport, and now we will spend millions in penalty money not to build this bridge. At the end of all that money wasted, we are back to where we started - no bridge.

Currently the Liberal party is in deep trouble over the sponsorship scandal, with allegations of kickbacks and taxpayers' money changing hands. Since it's a minority government, it may fall any time. Pundits are pointing to a June election. This will just be one year after the last one.

So the party in power for a long time is plagued by corruption, and Opposition is agitated and is taking steps to bring down the government and force themselves into power. The Prime Minister is angry and threatens to punish the guilty. A special committee has been set up to investigate the crimes and report to the government on how to prosecute the criminals. It will submit its report in a year.

Sounds a lot like another country I know.
Posted by mezba at 9:31 am No comments: