An Ideal Mosque - Part I - The Praying Area

Lately there has been a spike of interest in mosques and attendance by Muslims of religious services. WoodTurtle has a series on Unmosqued, which is also the title of a documentary/movie. Here in Toronto, we are blessed with a huge number of mosques that vary widely in the prayer space and range of services provided. I am personally blessed to live near the Islamic Foundation of Toronto (IFT) and the Islamic Institute of Toronto (IIT), both of which are sterling examples of great Western mosques.

Recently, few close friends of mine who live way north in Brampton have started an movement to establish a mosque in their area, called BARIC. Since these are friends I have known from my Middle East days, and I was talking recently with the general secretary on the role of women in a mosque, their activity has led me to start thinking of what an Ideal Mosque should look like. This post is an attempt to crystallize those views. I will start with the praying area.

An Ideal Mosque of course existed during the time of the Prophet Muhammad (peace be upon him) and from all reports, this is a rough sketch of the praying area of the Masjid-e-Nabawi. Please note that this is simplified; there were many doors leading into the mosque courtyard from nearby houses, there was an area reserved for the Ahl-Suffa (men who lived at the mosque because they were poor or chose to be, and whose primary job was to learn the new religion and its tenets, teach new converts and who lived off the generousity of the larger Muslim community). 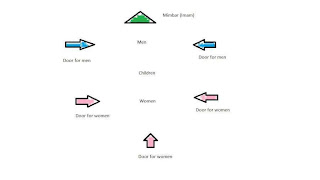 Note that there was no barrier between the men, children and women. It was simply a large space in which the front rows were taken by men, the middle by children followed by women, with a row gap in between. Everyone could see the imam and hear him directly. This was my original opinion of what an ideal praying space in an ideal mosque should be like. This is how the praying space at IIT is.

Recently, after having been blessed with a child, I noticed that I was no longer as enamoured with these type of mosques as I was with mosques that had separate enclosed ladies' sections - as that meant my wife could nurse our son in privacy and change him if needed. We have all seen these type of mosques. 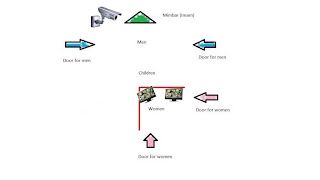 Notice the smaller section for women and the use of close circuit television and screens (which were definitely NOT there during the Prophet (peace be upon him)'s times). Moreover, which the enclosed space was great if you had a baby, this could be a service provided by the mosque (have a separate room for nursing or changing babies). Why intrude into the praying space? Moreover, the din of children crying and/or running around in a small(er) praying space doesn't make it very attractive to women worshippers, as is the fact that you have to have a working television cable system to just follow the imam.

However, some women just like the idea of a separate women's space so they can pray in privacy and in solitude. The problem is that for younger women, used to being treated as equals everywhere else, this apartheid type barrier seems regressive. Moreover, the women's space is now fixed in size, and is often much, much smaller than the men's. So, what can be done?

Now I see more and more what a visionary Zarqa Nawaz was with the episode called "The Barrier" - the second episode of the series "Little Mosque on the Prairie". While the episode had some glaring faults, her solution to the barrier question seems to satisfy everyone (or no one). 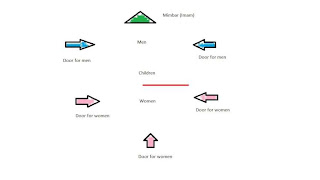 Leave half the space covered by a barrier, but leave the other half open for women who like to pray behind the imam. Does that sound fair?

What is the praying arrangement at your mosque? Is it ideal? What are your views of an Ideal Mosque? You can get in touch by leaving a comment here, or by emailing me, or getting touch via Twitter (a_bong).
Posted by mezba at 9:59 am 7 comments: