Along with Geeki and Mousehunter, a couple of weeks ago I attended a special screening of Slumdog Millionaire. I had been meaning to post on how awesome a movie it was. Don't worry - no spoilers below.

One of the great problems I see with Bollywood is that people won't see a movie without any big stars in it, no matter how good it is. And when there are those big stars, the public demands a certain story, even if that story has been played a thousand times.

It is for those reasons that I attended Slumdog Millionaire with absolutely zero expectations, and found myself not only blown away by the story, but absolutely enjoying every minute of the movie. Anil Kapoor has a special role in the movie, and there is one "item song" at the end credits.

It is better you go into this movie with no idea of the story, as you will enjoy it more. It's not your typical Bollywood movie (first of all it's mostly in English), even though it is a love story. It's also very deglamourized, and it's refreshing to see a girl not wake up looking like a million bucks!

5 stars for Slumdog Millionaire.
Posted by mezba at 9:05 pm 10 comments:

I don't understand this at all. This "market meltdown" makes no sense whatsoever. Look at today's Toronto Star.

The headline in the centre says "Toronto stocks rally".

Yet, look below to the TSX figures. They are all down! Er, where is the rally?

Then you have the main headline:

Yet we are in a recession and are supposed to be too poor to buy anything!

And we are told the Canadian economy are stable while the US economy is in deep trouble, yet it's our dollar that's down!

Someone is getting rich by trillions and it's not me.
Posted by mezba at 1:16 pm 6 comments:

Kazi Nazrul Islam was a great Bengali poet who wrote, more than 50 years ago, on the condition of the Muslims. This is what he wrote in Bengali:

What it means, roughly translated, is this:

While the world is reaching for the moon,
We remain too busy,
Thumbing through the Quran,
Debating fatwas about Talaaq.

Nazrul's poems seem prophetic today, and ironically, even more applicable. Today, India has landed a satellite on the moon. Meanwhile her cousins Pakistan has gone to the dogs and Bangladesh is not far behind.

Pakistan now has Asif Zarderi in charge, which should be argument enough, but Zarderi recently promoted Israrullah Zehri to national cabinet who had this to say about five women buried alive in Baluchistan because they wanted to marry according to their wishes, and not that of their elders:

“These are centuries-old traditions, and I will continue to defend them.” [source]

Bangladesh meanwhile looks headed back to one of the two thieves back in charge: either Khaleda Zia or Sheikh Haseena. If there was ever an argument against women leading a nation these two would be it.

In the end, the following poem of Kazi Nazrul, much more powerful in Bengali, remains sadly true.

Yesterday was feast in the mosque,
A lot of bread and meat
Are left, the mullah is very happy for that.

At this moment a traveler came wearing tattered clothes,
Said, “Sir, I am starving for seven days”
The imam shouted with annoyance, “What a nuisance!
If you are hungry, die at the dumping place.
Do you say your prayer?”

Traveler said, “No, sir.”
Imam shouted, “Then see your own way.”
Taking the bread and meat, locked the mosque.

The traveler goes back
While walking, says
“Eighty years have passed; I didn’t call you, my Lord!
But you didn’t stop my food or hunger!
There is no right of human in mosque and temple,
Priest and devotee locked all the doors of them.”

Canadians pause and reflect on Remembrance Day, which is held to commemorate the services of her soldiers and veterans. It is held on November 11 to recall the end of World War I in 1918. From early in November, it is usual to see people around the country wearing poppies. 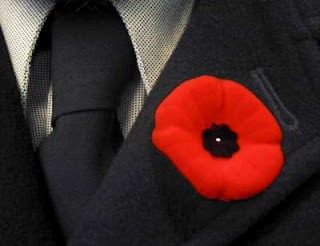 I pass the University of Toronto on the way to work and this morning was surprised to see something on the Atheletic field. It seemed to be a sea of white. 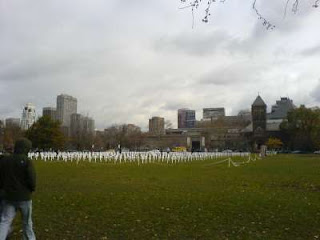 Upon closer inspection, I realized these were crosses, or mock-graves, all 628 of them, to mark those students, staff or faculty from the university who had gone off and died fighting for Canada in World War I. 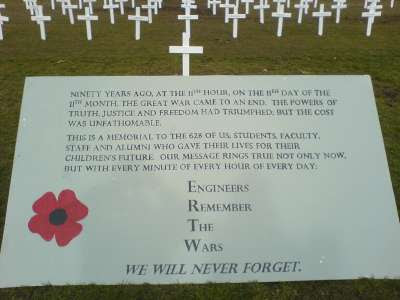 Around 10.30 pm, there was a service at the University of Toronto, beneath the Soldier's Tower. It was very well attended, despite the chill now prevalent in our November mornings. 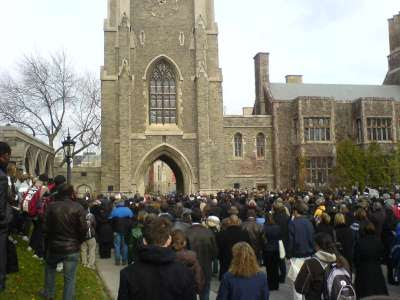 I always had a thing for bagpipes (maybe it had something to do with Braveheart) but the music is so sombre, reflective. I saw some people with tears in their eyes, and some young people had come with their grandparents, some of whom had army uniforms on.

After that, I walked over to Queen's Park, where our provincial parliament sits. There, at 11.11 and onwards, they do a 21-gun salute with these cannons. 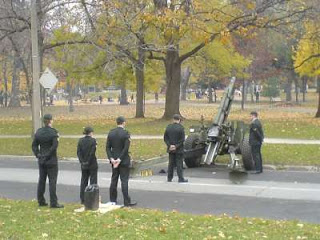 Memorial Day is a holiday in the USA, but I think it's right that it's not in Canada. Otherwise, it would just become another Long weekend with people taking time off to enjoy and party, rather than reflect on the country's long history.

In the service, they had a Jewish prayer and a hymn recited. I didn't mind, as this was more of a tribute to World War I soldiers, but in future wars, as Canada grows more and more multicultural, expect to see Quran and Islamic prayers incorporated into future prayer services.
Posted by mezba at 3:48 pm 2 comments:

I remember, eight years ago when news filtered of Bush winning the 2000 election. Most of my Muslim friends in the US had been ardent supporters of the Republican ticket, driven mostly by anti-semitism (I fear) caused by the Gore-Lieberman ticket.

It was a long fight, but ultimately Gore conceded. I remember it rained on inauguration day. Thousands of protesters lined up to snarl at Bush's parade. Under black umbrellas and dark clouds, Bush took the oath of office, and an equally dark chapter began in America's history.

I remember, four years ago, when I stayed with CNN late in the night, hoping the result would turn, and then, on getting up in the morning, finding that Kerry had conceded the election. My mind thought the thought that an English paper The Daily Mirror had printed so eloquently - "How can 59,054,087 people be so dumb?".

Yesterday, at 11 pm, as CNN made the historic projection, it seemed as if America had finally laid the ghosts of the Bush regime to rest.

Whereas the night had been dark and gloomy eight years ago, last night was crisp, bright, clear. The weather, as if on cue, was brilliant and unseasonably warm.

The celebrations - I have seen nothing like it following a political election. It was as if a team had won the World Series, or a country had won the World Cup. A colleague remarked to me this profound though, "I think the American people, whether they knew it or not, were oppressed. And they could feel it. For the last eight years, their freedoms have been suppressed, and their many rights slowly taken away, and their nation pillaged. Yesterday, something changed."

Now, as the USA embarks on a new era, I am reminded once more as to why, despite its many faults, America still remains a leader amongst nations, a truly great country, and a shining example of its ideals to the rest of the world.
Posted by mezba at 10:38 pm 17 comments:

Is a very funny movie.

Regardless of whatever the critics say.