Natalie Glebova of Toronto was crowned Miss Universe 2005 just some time ago in Thailand. I first heard the news from Behbood, who jovially gave me a running commentary on her win - "it was tough but she hung in there man!".

This morning, while taking a break at the Office, I was looking over the Miss Universe website with a colleague. I don't know why we looked at the site, I think I was making fun of the national costume that Miss Canada wore. It was a really outlandish something, with a really big headwear full of feathers. My colleague remarked that was nothing like a national dress, a Leafs jersey would be more like it!

Anyways, even then I remarked that I expected her to make the top ten. She is really pretty. The other girl I thought was pretty was the Miss India. And then Miss Canada wins it.

As of this moment the Miss Universe site seems to have crashed.
Posted by mezba at 11:54 pm No comments:

Is Love A Mental Illness?

I was driving to work this morning and one of the news items was that a new love is like a mental illness. Unfortunately I caught the very end of it, so could only think of all the mad Hindi movies I get to see now and then.

Later, the NBC reported that scientists now say the brain activity of those in a whirlwind romance is nearly identical to those with mental illness. This could explain why Tom Cruise is reportedly acting crazy.

In fact now I think of it, it makes sense. A girl I know from work recently hooked up with someone, and her boyfriend is obsessed about her. Without giving any more details, let's say he recently marked the 23rd week of the anniversary of the day they met. Now having known her for 3 years I don't see what the fuss is about [names and numbers may have been changed to protect the identity of the mentally ill]. She finds it cute. I am reminded of Dil Chahta Hai, of Saif's future wife's ex-fiance.

Actually the old Indian movie Mann (with Aamir-1-movie-per-decade-Khan) has a very good skit on mad lovers. Romeo And Juliet, Laila-Majnu, Shireen-Farhad, Heer-Ranjha, Sohni-Mahiwal are all about the power of love that has crossed the boundaries of rationality.
Posted by mezba at 6:39 pm No comments:

Attended Hungama, Toronto's celebration of its South Asian (read Indian) culture. The event was Dundas Square, near Eaton's Center. I joined late (around 6.30 pm). We were there till 11 pm.

The items ranged from the very good (the punjabi sukhbir songs like 'Gul Naro Ishq') to the extremely bad (the rendering of 'Laila Mai Laila' by someone who looked neither like Zeenat Aman nor sang like Nazia Hassan) to the average (the human boombox) to the mildly hot (the bellydancing routine that had the crowd baying for more).

Ofcourse there were the usual characters amongst the attendees. There was a Chinese lady who kept trying to do a bhangra. Except she kept raising her legs rather than hands (a combination of Falun Gong bhangra maybe). There was the desi fob behind us in a 3-piece suit who kept murmuring "thish ish not reeel orrissha dansh". Except he was saying that during the belly dancing. No one paid any attention, understandably. There were the occasional white guys who happened to be in the area and short of cover needed to attend the night clubs nearby.

After the show the Gang of Three (you know who you are) split for La Marche. On the way we stopped at Ontario place, parked and entered to roam the place. We saw this crowd of guys in black tuxes and girls in white, and figured we were at a wedding. Then a security guard came and asked us why we were there, and we replied (lied) we were there to pick up our friend from the wedding. He said ok and left. Later we learnt this was prom night for the graduates of the local high school. The security must not have been very tight.

Over some rosti and mackarel and smoked salmon, the night ended with a discussion of the downfalls of Bengalis. And the Gang of Three retired for the night.

PS. So far I found only one reference to the event on Google news. I am pretty sure the ethnic channels and newspapers have covered it galore. 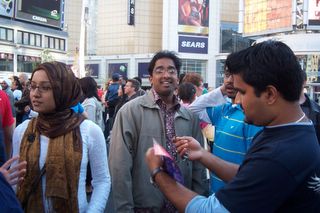 With some friends at Hungama.
Posted by mezba at 4:37 pm No comments:

Saw Bunty Aur Babli last night at Albion. It's a good movie that you can watch one time in the theatres and then later rent it out to watch again. It's fun, good, wholesome timepass, that the family can enjoy (except one scene between Abhishek and Rani that caught everyone by surprise).

The capers - original, the masti - spontaneous, the melodrama - not too much, the songs - good, the acting - too good, Aishwarya - hot in the item song (and I mean sizzling, Angelina Jolie hot, and to those readers who live on Planet Mars and did not know Ash was in the movie, too bad). The couple looked really good, and had great chemistry and comic timing.

In short, go watch Bunty Aur Babli, and if you have your own Babli - take her!

PS. Compare the reviews of India-FM (warning: spoilers) and Rediff. Something to note: Indiafm does not write good reviews, they literally give the whole story away (with spoilers), while Rediff does a brief synopsis and then reviews it. Moreoever, lately I have found after watching any movie I tend to agree more with the Rediff review than the India-FM one.
Posted by mezba at 8:02 am No comments:

Was over at Indianapolis for the long weekend. I wanted to take the car out on a long drive and see how it handles. The rest of the family wanted to visit Rumi's. We were also supposed to go to Chicago, but in the end decided not to. There would not be enough time to do the two cities, and we(I) would end up too tired from driving.

The journey was mainly uneventful. The altima (Alhamdulillah) handled wonderfully. I discovered the joys of cruise control. On the way there, since it was daylight all the way, I had no problems driving. I surprised myself, that I could drive 11 hours on the go. We took only about 3 breaks, mostly to fill up. Mom had a stash of food ready, which we partook regularly.

Indianapolis was ofcourse a very big, and boring city. There's really nothing to sightsee there. It was one week before Indy 500, so we saw lots of bikers, bikes, NASCAR type people, and a couple of practice and timing laps. Also, the lack of brown people was startling compared to Toronto. Even the Dollar Store there employed white people. My cousin, Rumi bhaia, has a lakefront property there, with a big backyard, so we had lot of outdoors fun there. Didn't get time to do any fishing, unfortunately.

The drive back was mostly fine. We hit a big traffic jam near Detroit. Apparently the construction south of the border is as mindless as here. For one hour we crept at 30 kph. Then from London to Toronto it was dark (past sunset) and it was a tough, tiring drive. 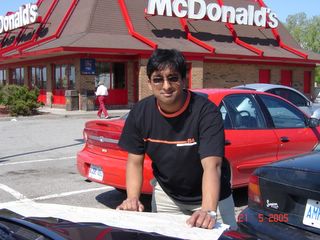 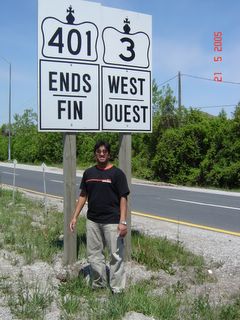 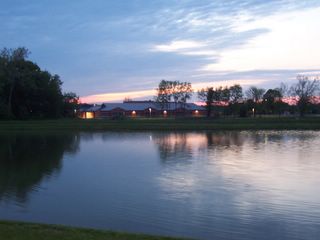 Just returned from a Wonderland day, spent there courtesy BSA. Like last year, this time I, too, was in charge of organization. The procedure was a little different. Last year we collected money before hand, and Wonderland gave us the tickets on the day, so I had to wait in line at Guest services before 10 am and everyone had to wait for me. This year Wonderland had emailed me the tickets beforehand, so we were able to get in early, and I paid Wonderland later (around evening when we were all taking a break).

The weather was very cold (last year we had 25 and sunny, this year was 4 and there were hails at one time, though it was mostly clear). However we still had fun. I had dressed for the weather, as did Rakeeb (who judiciously sent me weather updates the night before). The lines were non-existent (a very distinct advantage in coming on a weekday before schools open), and we went on all rides that we wanted to.

Right now very tired. Tomorrow will probably wake up with a headache, bruises and other 'hangover' symptoms. 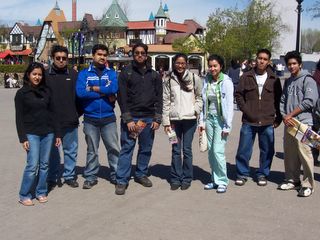 The grand "Before" picture 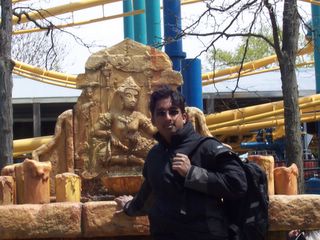 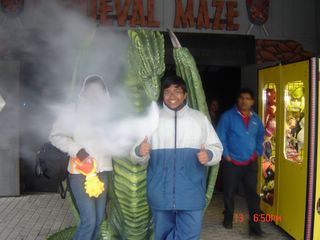 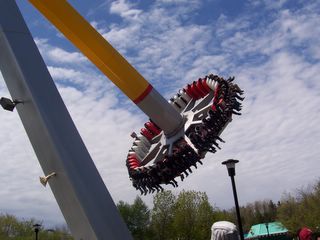 All on the Psychlone
Posted by mezba at 11:40 pm No comments:

Abeer had a performance at his school tonight. He played the role of Bill Sikes in Oliver Twist. It was a musical (sort-of) play. And really good. I mean really good. The kids were from grade 4 to 8. The teachers' names were Mrs Krumholz (that's a real name), and Ms Owens. The kids acted very well, especially the guy who played Bill Sikes (and I am not saying because he was Abeer).

Bill Sikes is the main villain who controls Fagin's gang, gets rich off them, has a pretty girlfriend (who has a change of heart at the end), and then tries to use Oliver to be part of his plan to rob Mr Brownlow (who also happens to be related to Oliver in the end).

I thought, besides Oliver, Bill Sikes was the next best character to play. He was in many scenes, and had a whole range of emotions and histrionics he could do.

I have always felt this was Charles Dickens' best novel (it's so like an 80s Hindi movie). 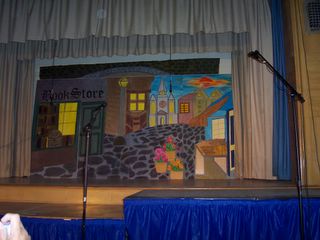 The background for one of the scenes 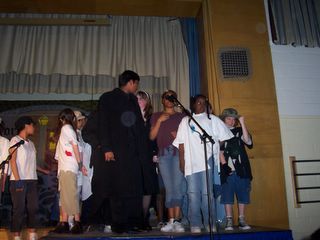 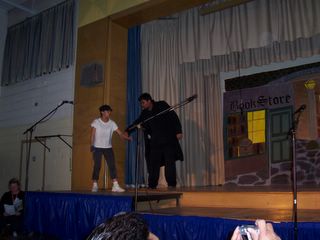 Bill Sikes (Abeer) leading Oliver to rob a house
Posted by mezba at 11:16 pm No comments: