And then there were two: Germany, and Argentina.

If you go back to my very first set of predictions, I had picked Argentina to win. They are now one match away from proving me right.

There are basically three reasons why Argentina should win.

There is absolutely no logical reason Germany should NOT win the cup. They have been the team of the tournament so far.

The team oozes class from every position, and their dynamic, fast, attacking tempo of football is easy on the eyes and effective on the score sheet. They took apart Brazil (oh, how they took apart Brazil!) as if they were playing a school team. Germany is the #2 ranked team (and #1, Spain, is out in the first round). There is absolutely no footballing reason why Germany shouldn't win the cup.

I have been picking Argentina to win simply because of a gut feeling, and because I was listening to my heart, not my head. But there are a few logical reasons why it's not a slam dunk for Germany.

Messi. He draws 2-3 defenders to him immediately as he nears the goal, thus creating space for others. And the genius of the man is that he still finds a way to pass or create space for himself despite the extra attention. And his support cast hasn't been bad either.

There has been a quiet steely resolve to Argentina this time. They haven't gone behind in any match, and in no match at all did they ever look to be in trouble or under pressure. And crucially, luck has favoured them just when they needed it (the 90th minute Holland chance - their first - comes to mind). They seem to have genuinely gelled as a team, and want to win it not just for Messi, but for their country. Yet they haven't let their passion or emotions drive them crazy (unlike Brazil).

Email ThisBlogThis!Share to TwitterShare to FacebookShare to Pinterest
Labels: Sports

I wanted to personally give you the good news that the illustrated book on Surah Nuh (Noah), with 102 pages containing over 150 high resolution images, built using Lego bricks and other toys, is now out for sale. Just in time to make the perfect Eid gift, this book contains:
The book also features a bonus comic by Cartoon Muslim, on how one can implement a lesson from Surah Nuh in today's modern life. Improvements over the previous book (Surah Kahf) include better construction of the toy dioramas, higher resolution images leading to better print quality, consistent light and brightness quality across images, and keeping the lessons and dialogues informative and yet child friendly.

Here are the links to order the book:
Currently there is a sale on the book (regular price $22.99, but discounted on Amazon.com) available for early orders. I have ordered several times through Amazon.com, and remain a highly satisfied customer.

For those living in the Greater Toronto Area, if they wish they can place their order through me and it will cost them only $20 (no taxes, no shipping). To do that, please email me with your contact info so I can get in touch with you.

Here are some images from the book: 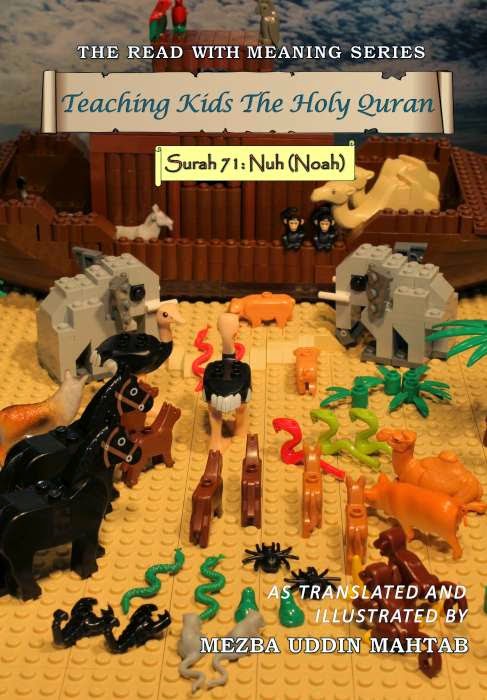 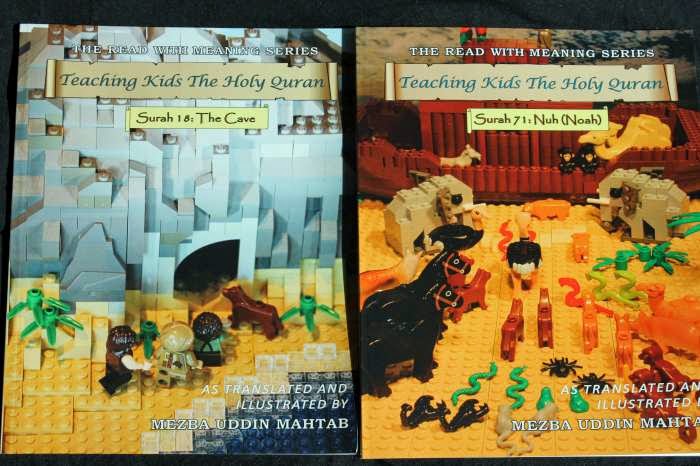 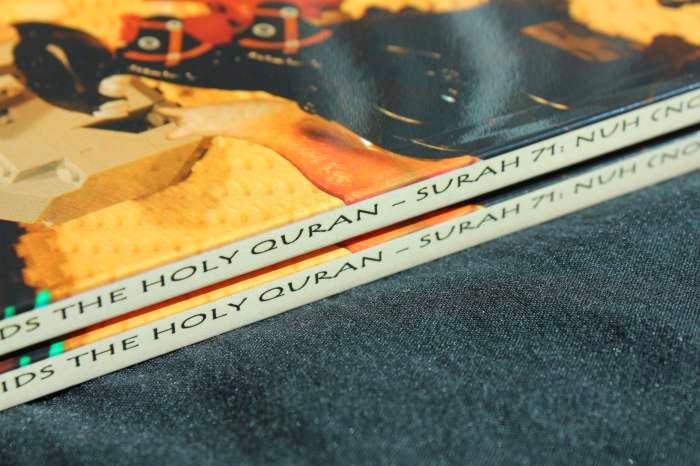 A sample of pages from inside the book
﻿ 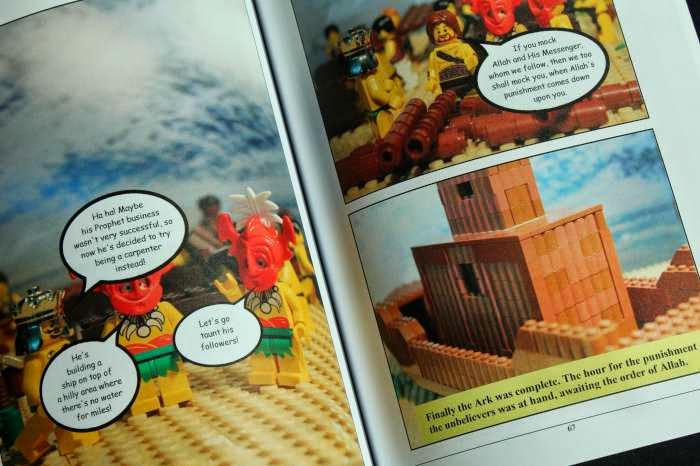 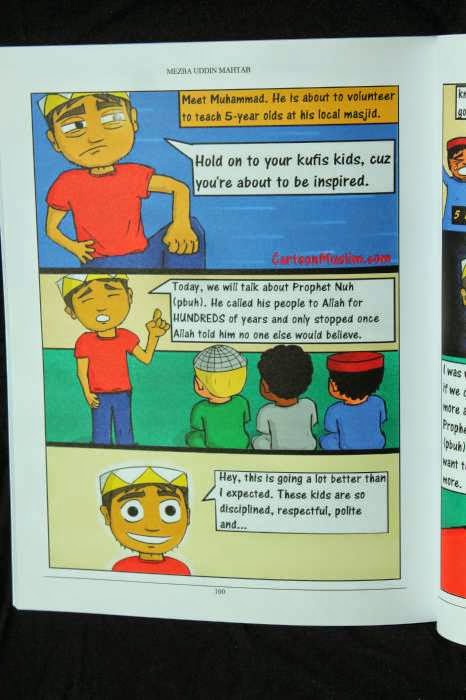 The comic by Cartoon Muslim﻿ 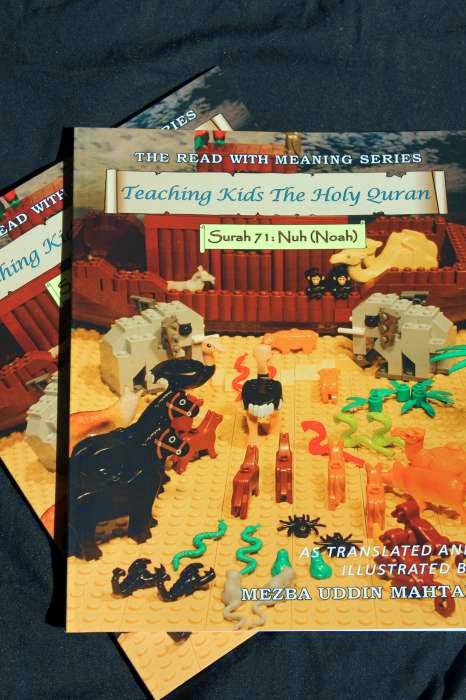 Please note: that in keeping with Islamic traditions, the face of Prophet Nuh (peace be upon him) is not shown. Certain scenes will show an outline of his character from the back, just like in the last book.
Posted by mezba at 1:49 pm No comments:

So at last, the cream has risen to the top, and we have our final 4 contenders still standing from a crowded field of 32. In a week, only one of them will have written their names into the annals of history.

Brazil vs. Germany
England superstar Gary Lineker once famously quipped, "Football is a simple game; 22 men chase a ball for 90 minutes and at the end, the Germans win." In hindsight, it was foolish to pick France to reverse a 30 year old history and beat Germany in their quarter final match. Reviewing that game, the Germans got an early goal and then never let France pick up their game. By making the semi final for the fourth time in a row (a record) the Germans have shown that they are a tournament team, they know how to last the distance. The question is, they have been here before. Can they go on to win?

Certainly Brazil are no shmucks. While many were in angst after their match with Chile, I wasn't perturbed. As I said, they dominated and could have had 4-1 on another day. Brazil simply blew away Columbia and only a period of sustained pressure at the end of the game whittled down the goal difference and made it a thrilling 2-1 game. However, and this is a big deal, they are without two of their best players. Neymar and Silva are out (with an injury and a suspension, respectively). With Brazil weakened when they meet in Belo Horizonte on Tuesday, Germany will never have a better opportunity to end the Selecao's unbeaten run on home soil that extends back to August 2002. The 2002 World Cup final will also be on their minds, and what a better revenge than to send Brazil out of their own world cup.
Prediction: Germany

Argentina vs. Holland
Quite a few folks were fearful of a Belgian upset, but I had picked Argentina over Belgium as they have the better quality of players, and they have Messi. There's one more thing they had in the Belgium game, and that was defence. I was actually quite surprised to see Argentina comfortable with a 1-0 lead, and content to defend it. Sure, they looked dangerous on the break, but that was because Belgium was attacking them to equalize. The early goal ruined Belgium's game plan.

Holland. Wow! So nearly, oh so nearly, did Costa Rica have it! However, by substituting their goalie at the 120th minute and then winning the penalty kicks, Holland has sent out a big message. They are here to win, and even if you want to take it to tie breakers, they are ready and have a game plan. However, I really hate the way Robben dives. If for this, and no other reason, I want to see them defeated. Life is sometimes unjust in the way it rewards cheaters, and we all remember how Germany won in 1990 via a questionable penalty, but this has been a great world cup and it shouldn't really reward divers and cheaters.

Also, the Messi factor. With Christiano Ronaldo out, Zlatan Ibrahimovic not even here, Neymar out with injury, and Spain's constellation long out, it's Messi who remains and the stars are aligning for him to take Argentina to glory. He knows it, and this is his year.

Email ThisBlogThis!Share to TwitterShare to FacebookShare to Pinterest
Labels: Sports

I wasn't going to continue these predictions; after all there's only a few games left and teams are very hard to call now. However, I decided to finish what I started, and since the Round-of-16 was 7 correct 1 incorrect for me, I decided to see how accurate my quarter final picks would be.

Germany vs. France
This should be a cracker of a match. Both teams are playing well and both had hard fought victories over plucky African sides in the Round of 16. Germany (then West Germany) had a tough match with France in 1982, with France leading 3-1 before Germany equalizing and then winning on penalties. Four years later, another German victory. It's almost 30 years for France, and I think this time they will get it. Why? This world cup, Germans had been playing at the same level (an excellent level) but the French - when they needed to - they could raise their game a level up. Case in point: the last quarter of the Nigeria game.
Prediction: France

Brazil vs. Columbia
Another cracker in store. They had contrasting games in the Round of 16. Brazil sneaked through against Chile on penalties, while Columbia had a great game (or rather, their star James Rodriguez had a great game). However, I don't think Brazil was as bad as everyone is making them out to be. Against Chile, especially in extra time, Brazil could have easily won 4-1 on another day. They had a legitimate goal disallowed.
Prediction: Brazil

Argentina vs. Belgium
Now this is a hard pick. On one side, I support Argentina and want them to win. On another side, Belgium played a fantastic game against USA when on any other day they would have won 10-0. Both sides have a habit of getting late winners. Against Switzerland though, Argentina looked stale and out of ideas against a stubborn opponent, while Belgium never looked like they were in trouble. However, I am picking Argentina because a) they have players of better quality than Belgium and in a game where the style and tempo is the same the quality will come through and b) MESSI. Messi has played a part in each victory of Argentina so far. Will Argentina qualify for the semi-final after 24 long years? I think so.
Prediction: Argentina

Netherlands vs. Costa Rica
The Dutch has played the beautiful game in a beautiful manner for all of one and half game. Against Spain in their opening fixture, and against Australia for a bit. After that, it has been the same ol' Dutch - dirty, scrappy, diving, and somehow finding a way to win. Costa Rica has played attractive soccer so far, but definitely they begin to tire as the game goes on and of course, they lack the quality of the Dutch. However, given that Netherlands was 3 minutes away from being knocked out last time around, I am going to listen to my heart instead of my head and pick them.
Prediction: Costa Rica
Posted by mezba at 1:39 am 1 comment: