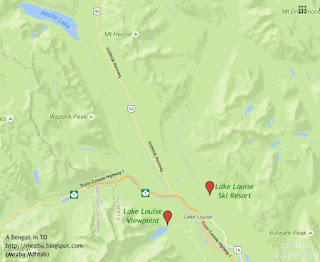 As you can see in the map above, this highway veers West and goes into the province of British Columbia. To continue through Banff National park, and then onto Jasper National Park, you must take highway 93, also known as the Icefields Parkway, after passing Lake Louise. 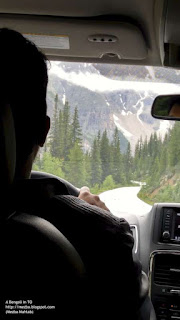 The Icefields Parkway is often called the "most beautiful highway in the world". Now it's not definitely the fastest highway - speed limit is usually 90 km/hour throughout. It's definitely not the one with the most lanes - most of the time it's a single lane each direction and if you are stuck behind a slow moving car, you have to move on to the oncoming lane to overtake (when it's safe, of course). 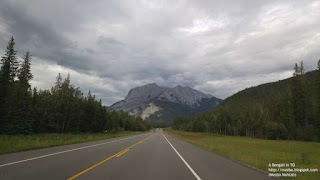 Yet it's one of the most beautiful roads in the world, and a pleasure to drive through. You don't want to drive through it fast. You want to take in the rugged landscape of the Canadian Rockies on either side of the highway. In fact, just as we started highway 93, my brother and I wondered whether the hype - most beautiful highway IN THE WORLD - was justified. After we reached Edmonton, we had to agree that yes, the hype was justified. 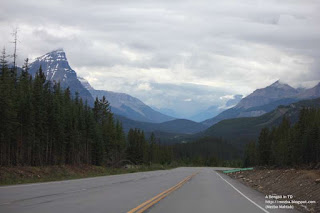 This is not your dangerous mountainous highway with death defying cliffs on one side. No! For the most part this is one safe, easy to drive, completely non challenging highway with jaw dropping beautiful postcard scenery throughout on either side.

Most of the time people just stop on the right shoulder frequently to take pictures - so beautiful and serene is the wilderness. Every minute we were seeing something or the other that was just so amazing. You would think your eyes would get tired of seeing yet another lake, or yet another mountain, but oh ... my ... God ... this was a feast for the eyes. 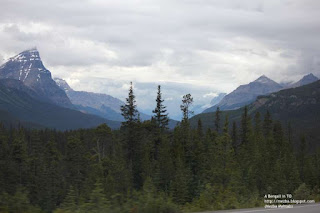 Stretching 232km (144mi.) through the heart of the Canadian Rocky Mountain Parks World Heritage Site, this highway offers access to a vast wilderness of pristine mountain lakes, ancient glaciers and broad sweeping valleys. We lost count of the number of times we came upon a beautiful lake, surrounded by tall mountains, that was so beautiful and so different from the last beautiful lake surrounded by tall mountains ... you get the idea. This highway winds its way through a unique and irreplaceable landscape rich in history and natural beauty second to none. 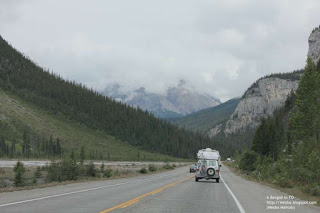 Of course, you have to remember we visited this place in the summer. The parkway is busiest in July and August with up to 100,000 vehicles a month. Although I have to say we never felt we were driving on a busy road - traffic flowed naturally.

Snow can be expected at any time of year though, and extreme weather is common in winter. A Canadian national parks permit is required to travel, and in winter, chains or winter-rated radial tires are required by law and road closures are not uncommon. I would NOT want to drive through this road during winter!

Interestingly, parts of the song Pyar Humko Hone Laga from the Bollywood movie Tum Bin was shot on the Icefields Parkway (and Calgary) during the winter. Although in typical Bollywood logic, they are driving an open top convertible with the top down and not wearing any jackets or scarves during the harsh Alberta winter. 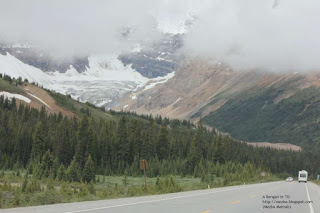 There are so many places where we pulled over to take spectacular photos or sample the glacier water trickling down a waterfall. We just took our time, with both planned and unplanned stops along the way. One note of caution: You MUST remember to fill up your gas tank before leaving Lake Louise – there’s only one service station along the entire route.

Remember, this is really in the middle of nowhere. 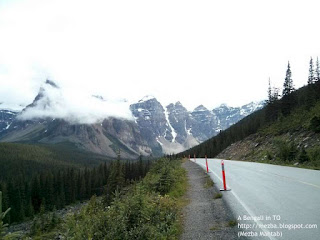 Even though there's no hairpin turns or stiff climbs, signs were every where warning drivers to look out constantly for wildlife. We were hoping to see a black bear or two, and then all of a sudden we see the cars in front of us slowing down ... because ... of this. A mountain goat! 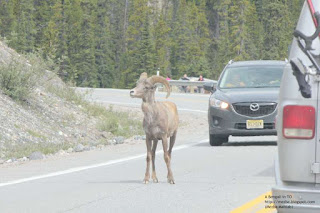 Yup! Mr. Goat decided this was the appropriate time to do an inspection of the highway. Even though there were natural bridges and wildlife crossing points all over, sometimes they do decide to use the highway like us humans! 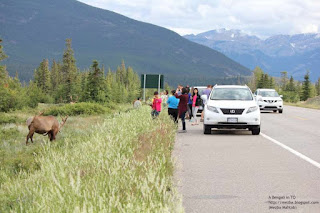 Here's a tip: if you suddenly see a few cars parked to the side of the highway on the shoulder, you should pull over too. Chances are there's an animal everyone wants to see (and photograph) and this is why everyone has pulled over! 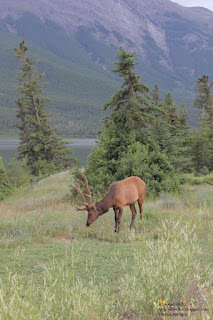 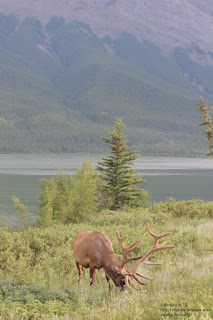 Of course this is where I must sound a note of caution, or two.

First, NEVER put yourself in danger when it comes to wild life. They are WILD life. This is especially true with black bears or moose, and particularly when they have their young with them. You do NOT want to mess with an angry mother bear.

The weather, as we were driving through the highway, was often spectacular. As we said, we stopped frequently. And sometimes, even when it rained, it quickly cleared up. Some of the best scenes were of lakes. Lakes there were virtually untouched and undisturbed throughout ages. Hopefully they are kept that way for future generations to enjoy.
Posted by mezba at 7:36 am

A very scenic drive indeed! I am familiar with the Icefields Parkway because I remember reading about it on a blog sometime back. I couldn't remember which blog it was so I just searched online now and found it. Seeing wildlife is an added bonus!

Canada is truly so beautiful! Yes, it's ridiculous how many people are completely unaware that a wild animal will charge at you if you go to close!

Great writing. Problem of traveling in Canada is those big Canadian mooses. :)

Nadia, wow that other blogger has some stunning pictures. I didn't end up taking a lot of pictures because er kids. Yes, I am blaming the kids.

Roshni, true one there was a bear (in Jasper) and people started to get too close. There was a park official who quickly set them alright.

Arifur Rahman, thanks. Yes, moose can be a danger, especially at night!