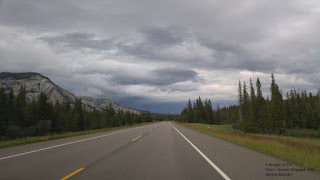 On the highway from Hinton to Edmonton

It was surreal to think I was walking in the streets of Edmonton, a city just under 3,500 km away from Toronto. I had always wanted to see the West Edmonton Mall, ever since seeing one of my friend's pictures of it on his visit. And here I was, walking in the mall.

An item crossed off the bucket list, as they say. 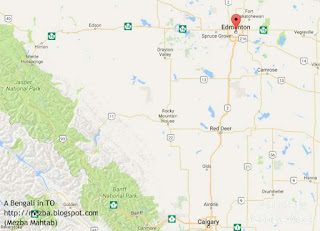 To be fair, Edmonton isn't exactly a touristy town. You see it on a Western road trip because, well, it's the biggest city out here north of Jasper. From Jasper we drove to this little town called Hinton, where we stayed the night. In the morning, after a good breakfast, we headed for Edmonton. In just under three hours, we reached our hotel in Edmonton. A quick freshening up later, we were ready to tour the city.

Here's a bit of comparison with the world famous Dubai Mall. 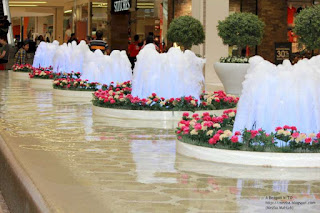 I really don't have too many pictures to share of Galaxyland, but this place is the second largest indoor amusement park in the world (behind Ferrari World). There's all sorts of rides here, including Mindbender - the world's largest indoor triple loop roller coaster. Incidentally, the parking lot next to Galaxyland is the best place to park in the mall if you are looking for a centralized location.

There is Sealife Caverns (also known as Sea Lions Rock). This is a place that has an indoor lagoon which contains a salt-water habitat with sea lions, as well as a replica of the Santa María. 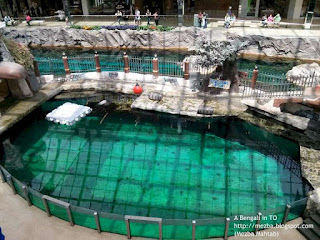 The ship is huge (apparently to scale) and you can visit it for $2 / person. This is also the most picturesque location in the mall.

There's also submarines (that you can pay and control - it's lot of fun!) as well as aquatic life that lives underneath the exhibit. Quite cool, if you think about it! Apparently this whole structure was badly damaged during a hail storm in July 2004 (of course long since promptly repaired). 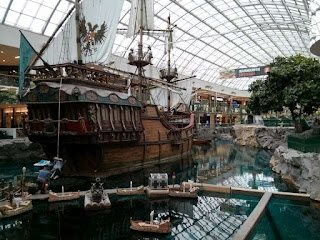 The gently shimmering water is really a pleasant hue of blue (I wonder how they maintain that colour) and makes for nice pictures if you are so inclined. I saw dozens of people with tripods and cameras there. 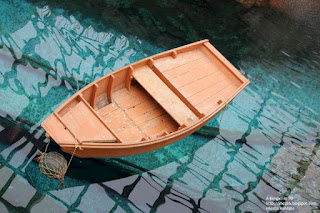 The lagoon is also used for sealion shows throughout the day. 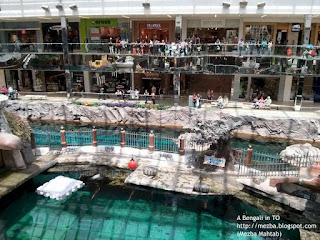 The shows are free if you want to watch from the balcony in the upper level of the mall, but you have to pay if you want to sit up close in the amphitheater in front of the lagoon. 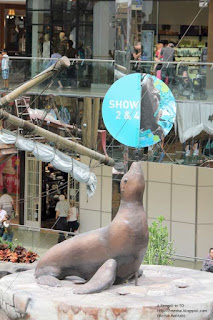 Honestly, it's not the Sea World or Marineland, so you are better off just watching it for free. 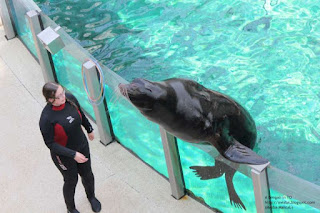 There's the typical small exotic animals (such as a baby alligator or newt or something). 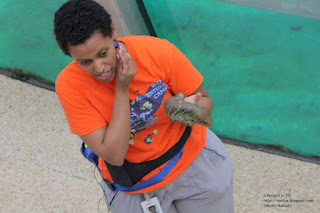 This is followed by the sea lions executing some tricks such as jumping through rings, swimming through hoops, listening to (and dancing with) their trainer and one cool trick - cleaning litter from the pool. 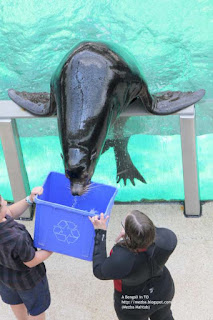 There's also a huge ice rink in the middle of the mall (incidentally this was the "inspiration" behind the ice rink at Dubai Mall). 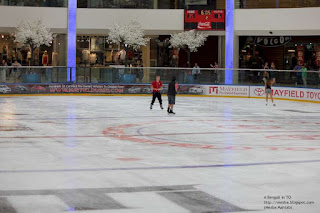 If you have visited Dubai Mall, should you visit West Edmonton Mall?

Well, if you are in Edmonton, you might as well. It's the only big attraction in town. However, it's attractive in its own way. For one, the Galaxyland and the waterpark is something that's not there in Dubai Mall, and also - this mall is actually busy with real shoppers buying stuff. You know .. it's a mall.

There's also another nice place in Edmonton we visited. It was the next morning, after breakfast, and before we headed back to Calgary. This was the beautiful Edmonton City Hall. 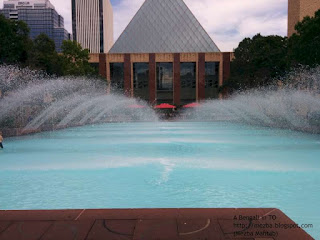 They have a nice fountain setup and a pool right in front of the City Hall, and it was a nice and sunny hot day (almost 30 C!). 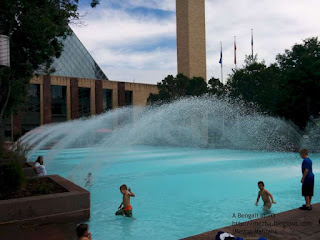 There was also some festival going on in front of the City Hall, with performers, street dancers, vendors and the works. 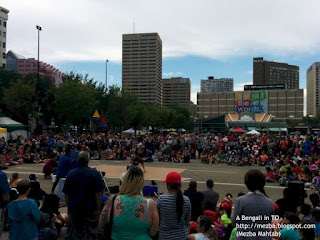 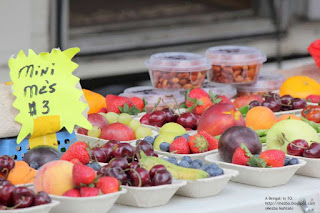 Over all, Edmonton is a nice city that you can completely visit the highlights in two days, and something worth checking out. It's only 3 hours north of Calgary, and as can be seen in the map at the beginning of this post, Calgary-Banff-Jasper-Edmonton-Calgary is a nice circle and a great road trip.