I wish I could say it was sleep that prevented me from uploading my notes from Day 3 immediately after the convention ended. However, it's been two days and I have had enough sleep. 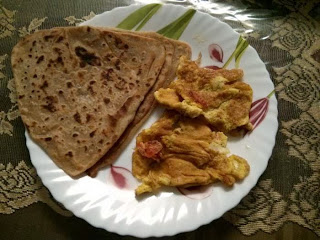 Parata and Omelets - Breakfast of champions

Sadly, I have to man up and say it was laziness, although I did clean my home office space up. Therefore, without any further ado, here's my recap of Day 3. I have to apologize in advance, it won't be a complete recap, as I had other engagements on that day, so I missed the morning session. 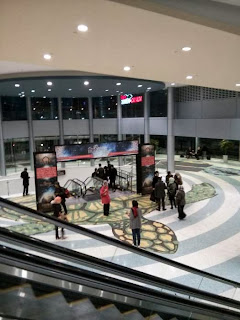 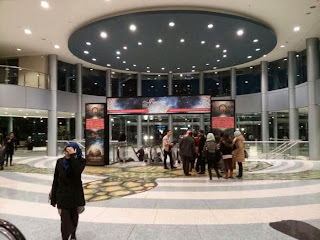 On the day of the conquest of Makkah, Umm Hani gave personal protection to 2 men who fought against the Muslims on that day, and her protection was accepted. This concept of extending protection (and forgiveness) to the enemy was also known to the Natives (the First Nation). Lois and Clark were able to see this going from the East Coast to the West, allowing people to pass if they were protected by women. Mandela wasn't a Muslim, but a great leader, and Allah elevates people who had great virtues. You need to be always prepared for greatness - you can be called upon to be a means to save lives, to help this planet and to cleanse this planet. You can see this in the sunnah of the Prophet - humble yourself and Allah may elevate you, using you to do great things. Mandela was humble, he used to tend sheep and cattle as a 5 year old. Zaid Shakir reiterated that we should urge our kids to visit farms. The Prophet pbuh gave all his animals names. Today, we are busy with commodification and things (starter house, starter wives -> trophy wives). "All of you are shephards and you will be asked how you took care of your flock". Stand with people and they will stand with you when you need them to. Through his humility, ability to pardon, through his life style and struggles, Mandela found power within himself to forgive and to empathize. 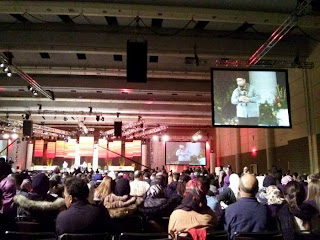 After the bazaar break, it was time for Sheikh Hamza Yusuf to deliver his lecture titled Breaking the Spell: Revealing the Dark Influences on Popular “Occulture”. It was again a lecture that used slides, videos and images to supplement his talk. If I could summarize it in once sentence, it would be that Satan isn't lying still; he is busy preparing the world for the Dajjal by subtle and not-so-subtle means and the forces of darkness from the unseen realm are busy influencing us. If I had to summarize it in one word, it would be fasad-ul-earth (or corruption on earth).

A culture that people produce is the representation of the quality of people. There's two parts to this - quality and quantity. If quantity overpowers quality, then the culture is on its way down. Today the dominant culture of the world overpowers the culture of another place that's exposed to this dominant culture - and the native culture of the place then becomes a caricature - living only as the costume of a doorman or the uniform of a waiter in a five star restaurant (think of UAE's restaurants and top hotels). So Muslims have to be aware of the demonic nature of this dominant culture and its affects on their kids and families. Dajjal will not come until the Prophet's name is not mentioned at the mimbar, and people become corrupted and lack empathy, manners or decency. Today's media and consumerist culture is helping society go this way.

As Muslims we underestimate Satan and his forces, and we don't use "Aoodhu billah..." more often (seek refuge against Satan).

Already we can see that society has changed so much that what was considered normal has now become deviant and what used to be deviant has become the accepted normal. Heterosexuals used to get married and homosexuals used to not marry. Now we have homosexuals rushing to get married and heterosexuals shunning marriage. The Muslim civilization, which gave birth to the Western Civilization, used to be about serving human beings (a sign of an Islamic rule was that a woman could travel from one end of the empire to another fearing only the wolves on the road, and nor the robbers or any other men). Today society is about control and exploitation. One of the meanings of dujjal (pronounced dooojjal, this is another variation of the word) is to spread cheap goods in the world.

Sheikh Hamza Yusuf then placed the entertainment and media world in his crosshairs and pulled the trigger. Increasingly we are seeing sicker and sicker crimes in the news. R-rated material is now being marketed to under 17 year olds. What is R-now used to be X-rated back in his youth. By the time a kid is 18, they will have seen 200,000 acts of violence and 16,000 murders on television, films etc. There is a book "Stop Teaching Our Children How to Kill". Those who deny the correlation are stupid. The average American (and the Sheikh apologized on not having the Canadian stats) watches TV for 5:11 hours / day. The CEO watches 2 hours / week. A top level manager watches 4 hours of TV / week. The lower you go down society's ladder, TV time increases. So smart, successful people hardly watch TV. 67% of people watch TV while having dinner. The Sheikh told us how in Mauritania it was considered good manners by scholars to leave books and debates of scholarly matters when it's time for dinner. 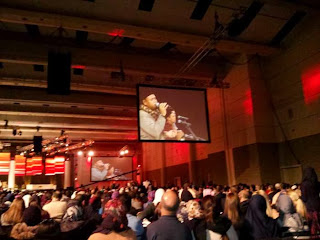 Facts and factoids rolled out as he gushed on the occultist nature of some of the leading figures in the industry. The creator of Family Guy was singled out, and their programs and series are what they use to push out their agenda. 1 in 3 pop music has lyrics about drug or alcohol use. Video games - GTA - were singled out. Those who play them, many of them have been in a physical fight or damaged property. These statements of the Sheikhs were always backed by his more than credible sources. He said that Eros the goddess of erotica in ancient mythology was married to Mars the god of war. The ancients knew that violence and sexual decadence went together. Today's video games make young people lack empathy. We watch a million Syrians die and then go on as if life is normal - we lack empathy.

Dajjal will have one eye, and the sheikh went on to show us the cult of one eye. This was, pun intended, an eye opener for me, as the number of images with one eye (or the All Seeing Eye) is so prevalent now in our society that when the Anti-Christ finally comes, he won't be seen as deficient for having the one eye (take a look the logo of LG, CBS, AOL, for example).

We should take Satan as your enemy and Allah asks us to fortify our homes. We can start by throwing out our TV and our Playstations and Xboxes.

After that speech, it was time for Imam Suhaib Webb to deliver a talk on Unmosqued. Now I have only heard good of him, from friends who had heard him when Imam Webb was on the West Coast (he is now an imam in Boston). This was the first time I heard him speak, and the only thing I can say is WOW! What a dynamic speaker! Funny, articulate, knowledgeable, all at the same time. I wish all khutbahs were like this.

He started by referencing the previous talk by Sheikh Hamza Yusuf and said it may make us depressed and fearful, but a believer is never fearful or never overcome by fear because he has Allah on his side. The key to overcome what we saw was to have faith in Allah, and remember that a believer is always a positive person. Never give up on Allah. The Prophet pbuh said if you had a seed in your hand and were planting it when the Hour came, plant that seed. We are not slaves to sadness and negativity and evil shouldn't scare us. The quality of the Prophet was to be brave. Moreover, every seerah book starts by listing the good qualities of bad people (those in jahilliyyah) so see the good of people and learn from that. 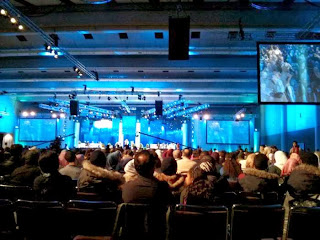 He mentioned the dua on how to get forgiveness of Allah when we slip up. I tried to find it on his website but couldn't. The dua goes something like this "O Allah I know my sins are great but I know Your Mercy is greater. My insecurity is great but my hope in You is even greater. Please forgive me." Or something to that affect. If someone can provide a link, that would be great. Imam Webb urged us to focus on our prayer and have intimacy with prayer and not see it as something of a chore. The Prophet pbuh said Bilal give us tranquility with prayer. The angels have 2, 3 or 4 wings to soar to Allah (mentioned in the Quran) and we are given 2 rakahs of Fajr, 3 of Maghrib and 4 of Zuhr, Asr and Isha to raise ourself as well. If we can't push a blanket off to get up for Fajr, how can we push for change in the world?

The speech was filled with humorous moments, for example when he said "I used to smoke a lot of weed before, and I plan to in the future ... in jannah!". He also recounted some funny anecdotes from his early convert days, which led to the unmosqued.

The youth have to witness love in our life. A husband should love his wife and demonstrate it. Imam Webb gave us examples from hadith how the Prophet used to kiss his wife (Umm Salamah), hold her hand (Saffiyyah) or declare to all about his love for her (Aisha). The problems in today's mosques are: political, racism (especially against black Americans), a bias against women and so on. In fact, one of the reasons people get unmosqued is due to religious people.

After this there was a break with Raihaan from Malaysia performing nasheeds, as well as comedian Maz Jobrani having us in stiches with his comedy routine - it was hilarious. 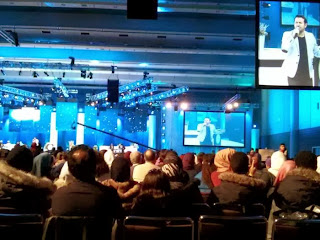 Finally it was time for the speakers of the day to give us some departing naseeha (about 3-4 minutes each) and the concluding dua (a moving one in Arabic) made by Habib Ali Jifri. And just like that, RIS 2013 was over. 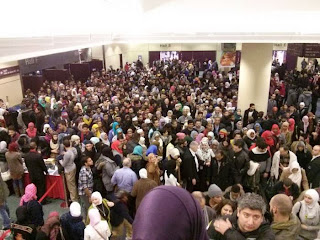 One of the suggestions I would have for RIS is to have more local speakers on the podium as well. I know people come mostly to listen to the famous shuyukh and those we can't listen to here in Toronto, but it would be great to have some local scholars also share the stage with some of these luminaries. Examples of people I would invite would be Sheikh Yusuf Badat of the Islamic Foundation of Toronto, as well as Imam Hamid Silmi of the Sayeda Khadija Centre.
Posted by mezba at 10:46 am

Thank you for the reviews, sounds like it was a really good event this year!

@Liya, it was indeed a great event, although I did feel we had a lot more variety of speakers the previous year. This year seemed a bit .. dry.