I was with some friends at the mall when one bought an England flag to attach to his car.

"That's such a bad investment." Another remarked, "England will likely go out in the quarter finals and your flag will be useless. You'd better buy a Brazil or Argentina."

The flag buyer looked around, lowered his voice and said, "Whenever England gets out, I will return this flag and exchange it for the current favourite and continue. Repeat if necessary. Thank God for Walmart's no questions asked returns policy."

That's our desi way of jumping on the world cup bandwagon.

I have noticed that during the World Cup, the flag wavers tend to be of the following types:

- Casual fans: They like this one team. It could be their country of origin. They will buy this one flag. And when the team is out, the flag disappears for another four years.

- Super fans: They like this one team. A lot. The flags will fly from all windows, nooks and crannies of their car. In the heat of the summer they cannot roll down their windows for fear of losing a flag. 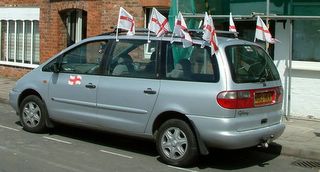 - Confused fan: Then there is the fan who does not know which team he will support. So he puts out multiple flags of various counties. Also known as the 'Hedging My Bets' fan. 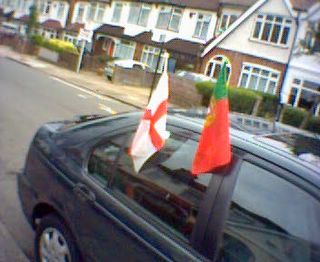 And finally, we have the

- Proud-To-Be-Canadian fan: This dude is just mad that normally cool folks are flying flags of countries he has never heard of. Besides, the national sports of Canada is HOCKEY dammit, not soccer! So he first flies the flag of a Canadian hockey team. But we know they suck and will soon be out of the playoffs, so now this guy is left fighting a lone battle flying the Canada flag.

BTW there IS a desi player in the world cup! [link]

The confused fan thing is hilarious! Perhaps they're not confused though. They just don't have one particular team that they're attached too.

What type of fan are you?

The confused fan thing is hilarious! I think I'm one of them, kind of at least...

THat friend of yours at Wal-mart is very smart indeed, very smart! ^_^

Aisha... funny eh? Although I am replying two days later!

BFob: I am England fan. Just a casual fan. Although I also support some other underdog teams. Such as Ghana, Australia. But primarily and England fan.

I feel its gonna be BRAZIL ALL THE WAY....

How do you feel now Anon? Probably the way I feel. Support France now if you don't want Brazil to be humiliated!