Yesterday I was forced to watching television. There was some Pakistani drama on ARY. A woman who wanted a divorce from her husband finally got it. And then, after some time, she wanted to reconcile with her husband and her husband also wanted to marry again.

I knew where this was going.

According to "Islamic" laws, they could not just marry. Some OTHER man had to marry the girl, fuck her (the polite way of saying this is 'consummate the marriage') and then divorce her the next morning, so he (the original husband) can marry her again. They call this 'halala' marriage.

Even as I was seeing this on TV I could not believe I was actually watching this. THIS IS SO WRONG. Not only does this law NOT exist in Islam but I was shocked that this misconception was being promoted by ARY.

Let's get this straight.

A man loves a woman, who is his ex-wife. He wants to marry her.

She also loves him, and wants to remarry.

So they get a third person to fuck the woman and then divorce her, so they can remarry.

Does this even SOUND right?

Again, this is not Islamic law. And it is SO HARD when you talk to people from the subcontinent (read: desis). People from India, Bangladesh and Pakistan are some of the most ignorant people in religion. They have all these bullshit knowledge that they think is Islamic just because that's the way it was done.

And this halala knowledge falls into that category.

Today, I read Nadia's post and found she wrote (?) about a real life incident in the gulf like this.

WANTED: A man to fuck a woman for one night and divorce her immediately. Paid position. Immediately hiring.

Again, does it even sound right?

Then why is ARY promoting this bullshit? And why do many of our elders actually believe this poppycock?

Now let me get to WHY this misconception exists.

First, please do NOT miss the 'third time'.

And second, the Prophet and others stressed that the woman has to be married to someone else in a NORMAL marriage. Not a marriage for the sake of divorce. It has to happen by circumstance.

And third, as Ali and many others have said, the man has to divorce the woman THRICE, in three different settings.

So, just to recap, for a woman divorced twice by the same guy, let's state this:

THERE IS NO BAR ON A MAN MARRYING HIS EX-WIFE BY DIVORCE.

For more info, just google 'halala and Islam'. Any cursory search will tell you it's wrong.

Despite all of this, why does it persist?

I leave you with the verdict of the Prophet of Islam.

(muhallil is the one who marries a woman and divorces her so that she can go back to her first husband, muhallal lahu is the first husband)

The proper answer to a husband who has divorced his wife thrice should be that he can NEVER think of getting back together with her.
Posted by mezba at 3:12 pm 29 comments: Links to this post

"Where in the World" Photo Contest - Round 2

So, I am one of 'Liya's "Where In The World" Photo Contest Bloggers. Here's the Round 2 picture, and you have to guess which city it's from. 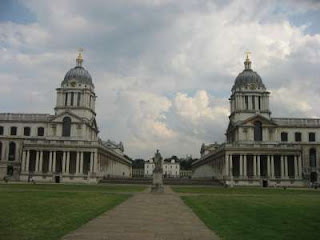 UPDATED! For those who could not guess it and emailed me for a clue, the clue is TIME.

The answer to my Round 1 is now published.

You can check the answers to other pictures at Liya's blog (original pics here).
Posted by mezba at 10:31 am 12 comments: Links to this post

"Where in the World" Photo Contest

So, I am one of 'Liya's "Where In The World" Photo Contest Bloggers. Here's my picture, and you have to guess which city it's from. 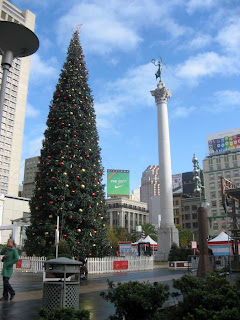 Bonus points if you can guess the location in the city.

You win: Er.. bragging points? (contact 'Liya for prizes)
Posted by mezba at 3:39 pm 10 comments: Links to this post

You know someone has returned from the best place in the Middle East when you have this souvenir: 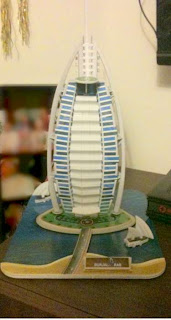 I love Lego so I really enjoyed putting together this 3d puzzle.

Our shelf of souvenirs from around the world is now quite full - we have to get a new one! 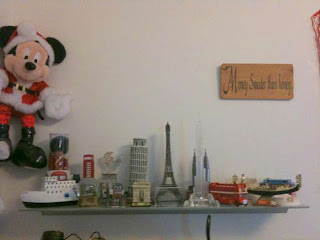 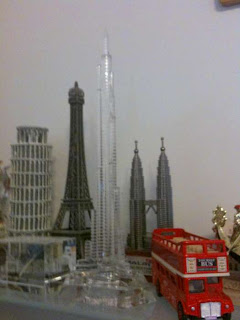 Too bad the name - Burj Dubai - is the wrong one. Maybe in a few years it will become a collectible!
Posted by mezba at 12:50 pm 13 comments: Links to this post

Suggestions for the Break Please

If you had to go somewhere for a week in mid-February (and you are in Canada), where would you go?

Budget is approximately $1000 per person.

1 week. Somewhere not cold. If you (dear readers) have any recommendations, please share! (and oh, if you want to sponsor my trip ...)

Dubai - It's a simple case of Jealousy 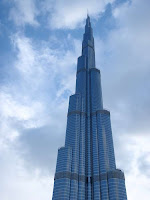 Image credit: Taha
So I was watching the spectacular opening ceremony of the building formerly known as Burj Dubai but now renamed to Burj Khalifah. It was something epic. Most people agree - Burj Khalifah is a magnificent building, well designed, pleasing to the eye, while being a marvel of technology as there were significant engineering and physical challenges to overcome while building a structure this big.

Check out this video - someone at the Burj Khalifah is at eye level with a plane!

Yet, while reading the news reports about this building, one can sense a condescending attitude from the Western media. Why is that?

During the initial boom stages, everyone rushed to fawn over Dubai.

"Today it's Mumbai, Shanghai or Dubai, else it's bye bye."

I remember that quote. Every time Dubai proposed some preposterous, the media wrote shining articles in golden letters. And this was the free media of the West! Only a few brave souls raised the issue of the abuse of workers in Dubai.

And then came the financial crunch, and Dubai's real estate crash. Dreams came crashing down, and suddenly, the tone of reporting of Dubai in the west took on a more sinister note.

It was suddenly with glee that Dubai's property bubble being burst was reported. It was with barely concealed laughter that we learned how cranes are now empty in Dubai, or how the Atlantis's washrooms flooded, or how sewage was piling up in Jumeirah beach. With dubious standards of reporting we read how cars are being abandoned at Dubai airport, with the number quoted sometimes more than Dubai airport's parking space would allow.

(Trust me, parking in Dubai is a hassle. You can NOT abandon 3000 cars in the airport, there's simply not enough place to put them all!)

Today should have been Dubai's crowning moment. They are literally at the top of the world. However, if you read through the reports (do a Google news search) you can see the tone of the articles.

Probably the last party in Dubai for a while ...

Now if you read through the comment section of many newspapers, which are not subject to any editorial standards, the malice is hardly hidden at all. Let's take a look at some samples from the Star.

What a waste of resources, talent, labour and money. This is not a refection of mankind's achievements since going higher is so "been there, done that". Little wonder this tiny, insignificant principality is bankrupt and requires support from the oil-rich emirates to survive.

Yep, The Burj Khalifa Is The World's Tallest Skyscraper ....
.... not to mention the world's ugliest.

Good For Them
I hope it's earth quake proof.

What an incredible waste of money for a country in the midst of a financial crisis!

A country with false sense of pride..Bigger is not always better.

Now these are only a sample, and there are many comments praising Dubai. But this is the Toronto Star of Canada. Care to know what the readers of the Daily Mirror in UK are thinking?

Why the hate of Dubai? It cannot be their concern of human rights because a) most of the workers are from Pakistan which these people hate even more and b) they deal with China, India, Russia all the time which also commit numerous human rights abuses. So, why?

I think it's because they are jealous. Dubai has reached for the stars, and has fallen. But nevertheless, their efforts are not going to be lost. They will learn from their mistakes and their achievements will remain.

Most of the top 10 of the world's tallest, biggest etc. are now slowly moving to Asia, and these people are jealous. They see the East rising and they cannot stomach it. Even more as their own countries are not doing something as imaginative or dream worthy.

Also a good read by the wonderful Achelois:
Why one should consider living in the GCC countries
Posted by mezba at 9:39 pm 29 comments: Links to this post

2009 holds some fond memories for me, with the most being my honeymoon in Europe. In my (sort-of) annual blog tradition(!) I will post a recap of the year.

In January I had just returned from touring the fabulous West Coast of USA. While personally 2009 had started with a refreshing holiday, it was sad for the people of Gaza for whom the punishment never seems to stop.

February is traditionally remembered in Bangladesh for being Mother Language Day and some cultural celebrations in Toronto drove home this point brilliantly. Obamania took over Canada and led to the brilliant words of Thomas Walkom, "in the end, he's their guy not ours". And oh, Star Trek is for geeks. More cultural shows (Brittanto of U of T) followed in March, and I finally completed the West Coast diaries.

In May, Archie chose Veronica. Perhaps.

July was my signature month of the year. I finally went on an European honeymoon, something I had long wanted to do. We did London, Paris, Basel and Lucerne, Zurich, Venice, Florence, Pisa and Rome.

Of course August marked the mysterious case of Furqan. Ramadan started and then I saw someone die. Come Eid, and this time someone close to us passed away. Thanksgiving was the highlight of October, while, er, November's highlight would be me giving in to the Twitter phenomenon (I still don't know what the point of it is, though!).

December's big event would be the release of Avatar, which I didn't review on my blog but watched it on the opening weekend and it's a movie that takes movies to a whole new level.

And now, as December 2009 passes away, I wish all the readers of this blog and to everyone everywhere a very Happy New Year, and may this year usher in a lot of good to a world desperately needing it.
Posted by mezba at 3:02 am 5 comments: Links to this post