Why did Archie choose Veronica?

Today, Archie Comics revealed that in issue # 600, fans can see who Archie will pick between Veronica and Betty, finally ending the over-70-year old love triangle.

He picked Veronica! I know Obama is not worrying over this issue (yet) but Archie has been a staple part of our pop culture - and now I feel something is over... an end of an era *sob* 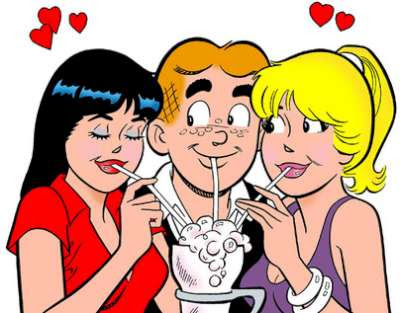 So, in any case, why DID Archie pick Veronica? I ran through some possible reasons:

The Tamils in Toronto have been protesting and holding marches for the last couple of months in the city. 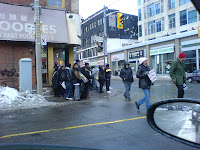 Even though the LTTE has been hostile to Muslims in the past, and much of the Tamil protests have been due to the LTTE losses, it's still important to support the rights of Tamils to protest and disrupt and make their voices known.

1. To fight comments such as "tell them to go back home to their country if they care so much".

WHAT THE FUCK - these protesters are Canadians and they are making their voices heard. So what if their issue is about a far off land, suddenly they can't protest about it in Canada? Who decides what issues you should protest on - you should be allowed to protest whatever you want to.

Telling the protesters to go "home" only shows racism - it shows you don't really regard these people as "Canadians". It's time for Canada to acknowledge that immigrants are also Canadians and it is perfectly valid for Canadians to have non-Canadian concerns. 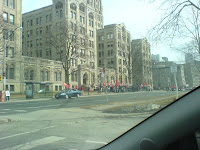 The Tamil protests have shown the value of numbers, steadfastness, organization and media relations - all things Muslims can learn a lot about.

We are hardly organized - it takes weeks to organize a protest with a semi-decent turnout. At that turnout, speakers go on a rant with hardly any thought as to media sensibilities or even basic decent intelligence. You have to be smart with what you say and pick your fights.

The Tamils have also shown the value of good press/media relations. Even after they disrupted the Gardner Expressway the news reported how the organizers were cleaning up the garbage left by protesters.

Steadfastness - the Tamils have done repeated protests and finally a big one that got everyone talking. Suddenly McGuinty has remembered his daughter in Sri Lanka, Ignatieff found a voice, and even Conservative Bev Oda has dropped her fight against red flags. 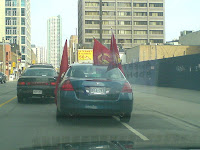 HAVING SAID ALL THAT

There is a legal way to protest. As long as they stick to legal protesting no one should grumble about the protests. Rather, marvel at how committed they are to the cause.

Yet when they take a highway hostage and stop people from visiting their families on Mother's Day, that's bone headed. And wrong.

Note: I am supporting the right of Tamils (or anyone) to protest. Which may or may not translate to supporting what they are protesting.
Posted by mezba at 1:26 pm 4 comments: Links to this post

We watched Star Trek last night. Before I go on, here's some rules for NON-TREKKIES GIRLS who watch it.

Aaagh! I couldn't believe it when one lady was asking her partner, "So how come there's a new Spark?"

2. Please write a ten page easy on how a guy whose face is bashed up half the time (i.e. Kirk) is considered "cute". Guys everywhere would like to know.

The Star Trek movie's awesome. Seriously, it rates a solid 9 on 10. Why the 9? Well, read the first comment if you want a spoiler discussion.

Man, are we spoiled for movies this summer or what? Last week it was Wolverine. This week Star Trek. Next week Angels and Demons. Following that week, Terminator. And then there's Transformers, GI Joe ...

I have been so lazy for the last month recently. With my exams over and studies done for the time being, I have been taking time off - and watching a lot of movies. Hollywood / Bollywood I have seen them all.

I have actually watched two Bollywood movies back to back on the same day. If there is proof that India is the new land of opportunity, Bollywood is it. It's where tacky scripts get funded, ugly people get jobs as actors or where a guy wearing more gold than Tutankhamen is a "music director".
Posted by mezba at 3:24 pm 13 comments: Links to this post