After returning from Rongpur, there wasn't too much time to go touring Dhaka, as we got busy with meeting with family. However, we still found time to do a little sightseeing and of course, lots of shopping.

One thing about Dhaka, while being much cleaner than Kolkata, it was also a traffic nightmare. The infrastructure doesn't seem to have grown since 1980, but the population has. It took us 2 hours to go 4 km once. We had to attend a wedding at 9 am, and started at 8 am. We reached there at 10 am. And no, the return drive wasn't much better. It's faster to walk. 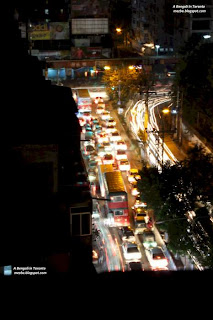 A traffic jam in New Elephant Road, Dhaka.
Picture taken by my cousin Asrar Chowdhury.
©Asrar Chowdhury, 2011.
Dhakeshwari Temple is an old temple in Dhaka, and we were lucky enough to witness a Hindu wedding done in authentic style on our last visit here. 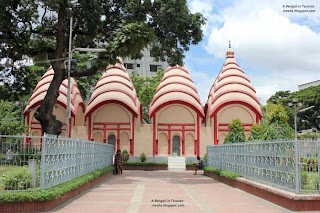 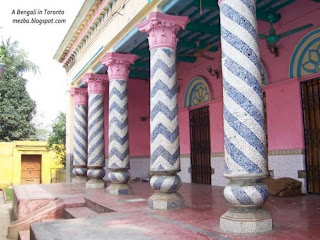 Another beautiful temple in Puran Dhaka (Old Dhaka)
Hindus and Muslims live together in Dhaka, and you don't have the ethnic ghettos that is a strictly "Muslim" area or strictly "Hindu" area, unlike Kolkata. The Moghuls had left signs of their presence in Dhaka. The Lalbagh Fort is one such place (the photos are from my last visit). The area is a favourite with couples, who all pay the entrance fee and engage in amorous behaviour away from the prying eyes of their parents. Each alcove in this complex was occupied by a couple! Reminded me of the Victoria Memorial in Kolkata. 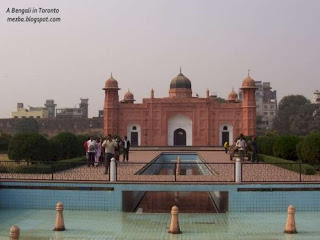 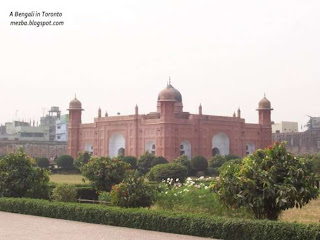 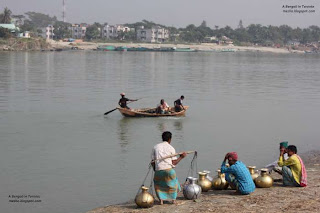 Life along the Burigonga river, Dhaka.
Picture taken by my cousin Asrar Chowdhury.
©Asrar Chowdhury, 2011.
Of course, you can't go to Dhaka and not shop! While many Bangladeshis go to Kolkata specifically for shopping (like we Canadians go to the US for the same stuff but cheaper), Dhaka does have scope for lots of shopping too.

Interestingly, I found Dhaka to have a higher cost of living compared to Indian cities. Now I don't know much about rent, but food, electricity, shopping (clothes), transportation was all MUCH more expensive in Dhaka. For example, a four course meal sent up to our hotel room (room service!) in Jaipur cost the equivalent of $10. 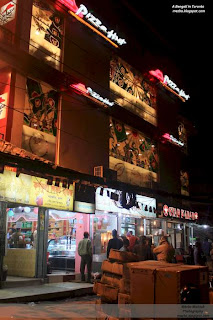 Dining out at Pizza Hut
Here, dinner for four people at Pizza Hut cost us 3000 taka, or about $45. The middle class of Bangladesh seems to have grown, and they now have money to spend.

We made a stop to Boshundara City, one of the most Western-like malls in Dhaka. 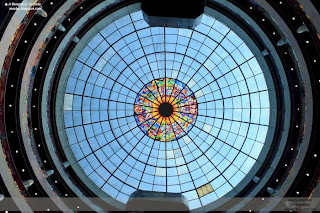 The rotunda of Boshundara City 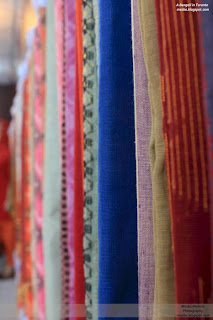 Clothes shopping in Mirpur
For saris, you have to go to Mirpur. It's a suburb of Dhaka (where they played the Dhaka portion of the 2011 Cricket World Cup matches involving Bangladesh). A lot of Urdu speaking people live around Mirpur (you wouldn't know it by listening to their Bengali though). This is the "factory outlet" of saris. Saris that cost 20,000 taka in malls in Dhaka can be bought for 3000 to 6000 taka here.

AND OF COURSE THERE IS THE FOOD. AND FISH. NO ONE DOES FISH LIKE BENGALIS. 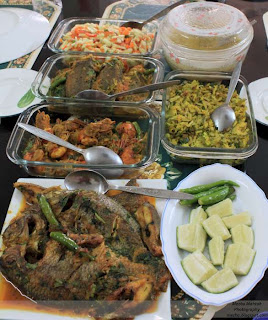 Lunch 'dawat' at my chachi's - you can see Tilapia, Koi, Chingri amongst the fish! 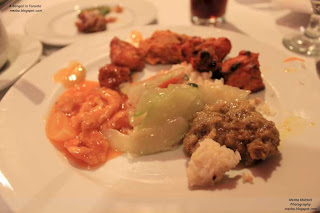 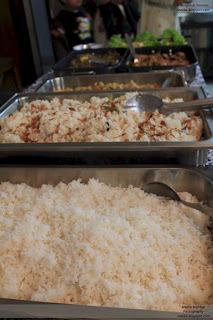 Dinner party at my mama's - can't be Bengali without rice ... 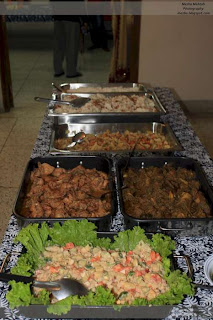 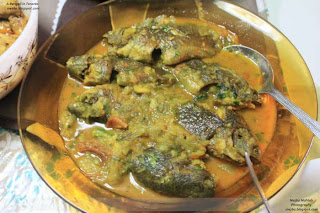 A "small" lunch thrown in our honour (as farewell) - see the koi mach! 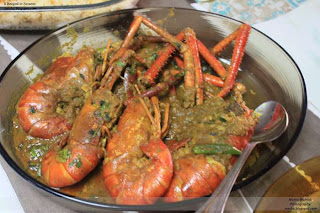 Not to mention, the giant shrimp! 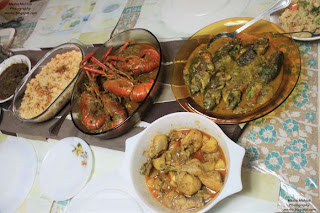 The food we ate before our flight!
A good place to visit is the Shohid Minar, a tribute to the martyrs of the Language Movement. As my cousin told me, "Bangladeshis have died for their Bengali" - so no wonder Bengali is on the decline in Kolkata but not so in Dhaka. 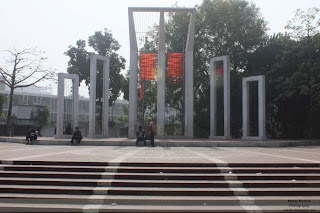 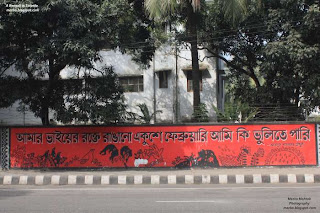 A statement outside the Shohid Minar - it has the famous like from a famous song about 21 February, 1952
A place not too many people visit, but everyone should, is the Museum of the War of Liberation. Right now it's in a tiny house, but I got the impression that they got some money from the government (they should!), so they are moving to a bigger place. Photography wasn't allowed inside the museum. In fact, I had to leave my expensive DSLR with the custodian at the gate (and that made me quite nervous!). My cousin however didn't seem too worried, and our camera was still waiting for us when we left. 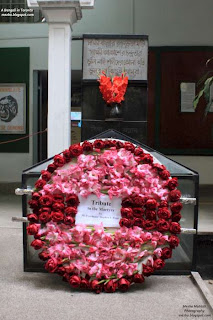 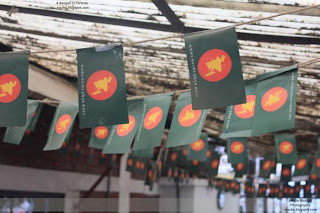 Flags at the Liberation War Museum
The museum had lots of stuff (artifacts, documents, weapons) etc. from 1971, with LCD screens (yes!) displaying information, and you can spend an easy 2 hours there. What made it better was that we visited with my cousin who knew a lot about 1971, so he was giving us a guided tour (and even an official there asked him a question!).

Soon though, amidst all the fun of relatives, cousins, music, weddings, food, shopping - it all had to end and we had to return to our lives (and snow!) back in Canada.

Fitting everything we had into the 2 suitcase limit per person (and 22 kg limit per suitcase) was going to be mission impossible. 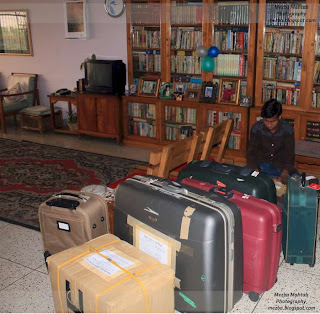 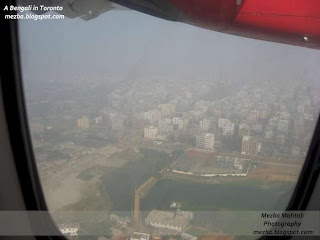 Heading back home (via Dubai) - a view of Dhaka from the air
Now you know what I do when I return from a vacation? I can't wait until it's time to plan to the next one! And now, regular blogging should resume in 3, 2, 1 ...