This Sunday, Geeki and I, along with a few of our friends, went downtown to visit the Luminato Arts festival. 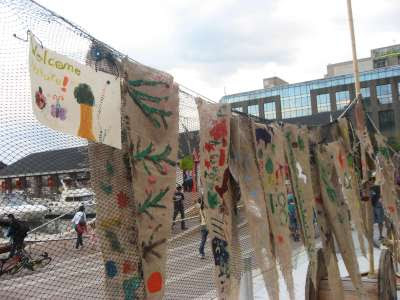 Of course art isn't really my thing - I mean what are those rags hung on a fence supposed to represent? - but as they say, it's art. Plus, it's all corporate financed so I don't think the city (and taxpayers) are paying a lot - and I can live with that. There was this drummer (picture above) who was playing his beats on the new wavefront deck opened along the waterfront, and people from the crowd were beginning to join in. I was thinking if Anu Malik was here, he would copy that tune. 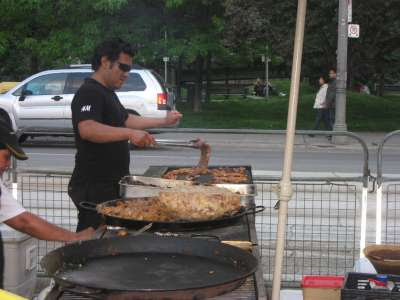 FYI, the mango lassi was 5 bucks. FIVE BUCKS!!! What a ripoff. Even the over priced Lahore Tikka charges less for theirs. Only white people could be seen having the lassi. I wonder what they were thinking.

"Oh these poor brown people. Their food is so expensive! No wonder they are so poor!"

As evening commenced we made our way to the HTO grounds. There were already a lot of people on that hill, awaiting the free performance by Cirque du Soleil. 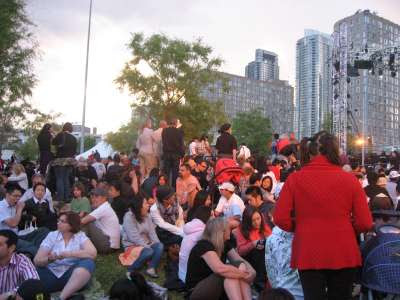 As I said, notice the crowd, its multiracial. When it comes to appreciating good FREE stuff it's not just brown people who are there. 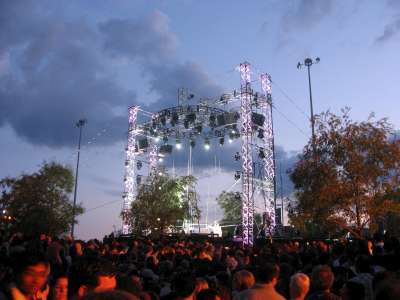 Look at the stage (picture above). I know we have to be green and all that, but whoever planted a tree in front of the stage should be FIRED. 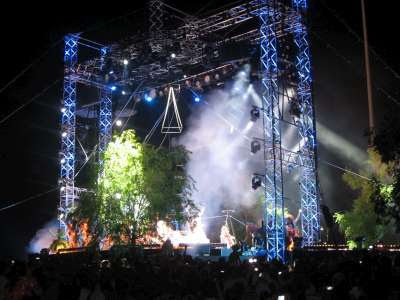 Show started late - 9 o clock was the start time and they started closer to 10! - we desis are slowly taking over Toronto with our punctual habits. They said it was due to rain or something. Once the show started though, it was quite good. 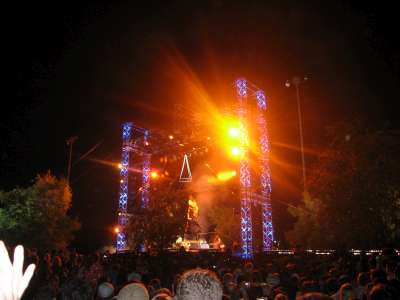 Actually, this one show was quite awesome. The circus acts were entertaining, the music fast paced and over all, quite a good finale. I would return next year.
Posted by mezba at 9:52 am 7 comments:

Convocation U of T

This past week was Convocation week at the University of Toronto. I always amazes me that no matter how crappy the weather is the week before Convocation, the sun and blue skies always show up for Convocation week. If you are a tourist planning to visit Toronto, if you schedule your trip on this week - you will have great weather. Year after year, it seems like a strange coincidence. 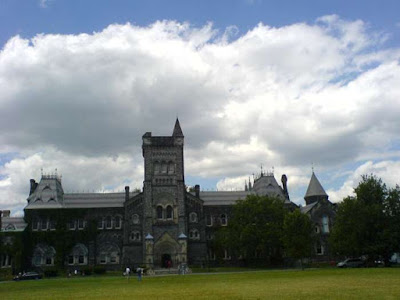 The picture above is of University College, from where graduates are led out in a parade to Convocation Hall. One member of my family graduated early this week, I ran into Geeki and his friends yesterday and yet another friend is finishing on Monday. Graduates entering Convocation Hall
As an aside, the university always tends to its athletic field right before graduation ceremony, so the grass is super green and well tended right on Convocation Week. And good weather seems to bring out people who want to play football (soccer). What really gets my goat is this: 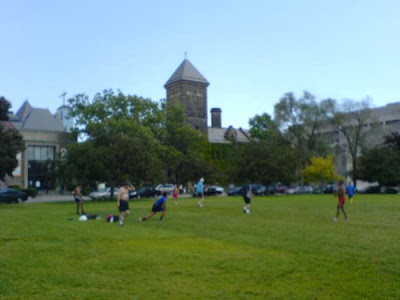 Few people decide to make a team. And the way they differentiate the team is that one group keeps its shirts on, the other group plays topless!

If girls wants to go topless that's another thing, but I mean, guys, I know you are dying to get your shirt off and show your six two-pack to the world, but no one can see it due to all that hair! Just... put a shirt on!

I end with a shot of one graduation ceremony in progress. 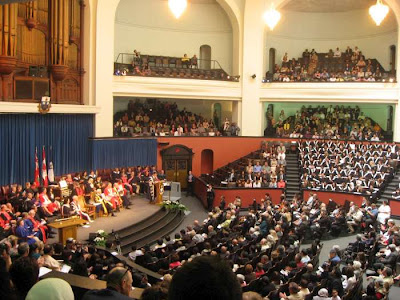 No stranger to controversies, Andrew Flintoff has made some stunning anti-immigration statements ...

"I have no problems with a multicultural society, I think that is to the benefit of the country. But you have to be careful what levels you take it to," Flintoff said.

"It annoys me when I phone a hotel receptionist in my own country and they don't understand what I am saying because they don't speak English," he added.[source]

I know I am a brown guy and I am supposed to be angry at Andrew Flintoff here, but I know exactly how he feels.

The other day I was at a No Frills grocery store, at the seafood section. There was a Chinese lady cutting the fish and dealing with the customers. Now, I had a question about lobsters - never bought or cooked them before.

"Excuse me," I asked her, "These lobsters, how long can you keep them in the bag before you have to cook them?"

"Do you steam the lobster here or do you give it live?"

"Look, this is the first time I am getting a lobster and you can't answer a single question!"

"You hold!" She then beckoned to another man to come and deal with me.

It was then I lost my temper. Here am I, in Canada, and I can't get serviced in English. Why the hell are you working here then? If you can't speak English, and that too PROPER GOOD ENGLISH, you should not be working in any capacity that involves dealing with customers.

So while I don't understand what Flintoff exactly means by "levels you take it to", I can certainly understand his frustration with people who reside in an English speaking country and make it a point of pride not to speak English.
Posted by mezba at 3:54 pm 12 comments: