Why Are (Some) Religious People so Rude?

I was at a wedding recently. As usual with weddings, there's lots of people taking photographs, and I was one of them, especially with my DSLR. And when the couple has spent more than $80,000 on the wedding, you want to take pictures.

And then I ran into one guy.

"Hey, don't take my picture!" He was adamant! So I replied, somewhat knowingly, "Why, religious reasons?"

"YES!" He practically shouted. "It is haraam (forbidden) to take pictures. So DON'T TAKE MY PICTURE!"

Alright! But then get the HELL OUT OF THE WAY THEN. Stop standing next to the bride and groom if you don't want your picture taken!

I don't understand one thing - why do people who don't want their picture taken always assume everyone WANTS to take their picture? I mean, you are not Angelina Jolie.

And another thing, have you noticed that these people, who often claim to be more "religious" (translation: taking things to extremes) are always ... RUDE!

In another wedding, I met someone else who did not want their picture to be taken. Do you know what he did? He threatened to break the camera of a 10 year old KID who was taking pictures!

"Taking pictures is HARAAM and against Islam and if you take my picture again I will BREAK your camera do you understand?" 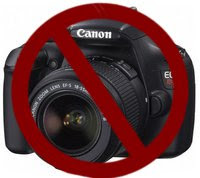 Way to go... be Islamic, threaten kids. Nice slogan. Recently, someone left the following comment on another blog (of a Muslim sister who also has a dog).

As soon as you read those, you know that the person has LOTS of disrespect. And what's up with the bad grammar and typos! It seems all our "Islamic friends" online didn't graduate high school English. The commentator goes on to berate her for caring for her sister's dog. Seems like they totally missed Imam Malik's point of view on dogs. Not to mention the story of the People of the Cave (and their dog) from THE QURAN!

On my blog's facebook page recently, someone commented, "IS IT ALLOWED TO SHOE QURANIC VERSES IN PICS....KINDLY GIVE THE ANSWER".

Now I don't think it's ever allowed to "shoe" Quranic verses, but the ALL-CAPS and the weak English immediately told me this person wasn't interested in a civil debate. Nevertheless, I gave him (or her) the references on Muslim artists, pictures etc. And just as I predicted, the person was back with the following gem:

"i am totally dissatisfied with the references you given. plz u give me the true reference after which u r showing it in pics or i will start a compaign to dis like your page....sorry for that"

I like how they apologize .. lol. And then they start spamming the web page, posting rude messages, after which I simply kicked and banned that user. There's something therapeutic about selecting a user and clicking "Remove and ban user".

I would put this aside, but this user is synoptic of a lot of Muslims. They hold fast to some ritual or practice, and anything that is SLIGHTLY different from them - HARAAM! KAAFIR! DOOMSDAY!

I think it's time to tell these people, "your haraam-ing is haraam!" Grow up.
Posted by mezba at 2:57 pm 35 comments: Links to this post

Why the Liberals Lost

Canada is awake today to a Conservative majority government, with NDP forming the official opposition and the former traditional governing party, the Liberals, reduced to a small rump. My quick analysis is over at Crescent Canuck, do visit and comment over there.
Posted by mezba at 3:38 pm No comments: Links to this post