Around an hour and half drive north east of Calgary lies the town of Drumheller. The drive to Drumheller is a different drive compared to the Calgary - Banff drives. The road passes through completely flat terrains and farm lands, and almost no mountains.

As you get closer to Drumheller, the topography suddenly changes to badlands and dry lands. This is Drumheller, also known as the Dinosaur Capital of the World, or Dinosaur Valley. 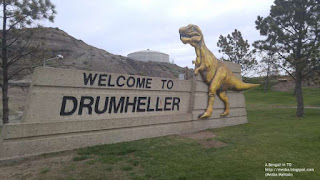 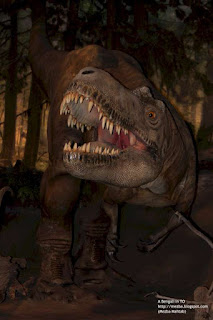 An exhibit at the Royal Tyrell Museum

Ever since 1889, when the first fossil of an  Albertosaurus, a smaller cousin of the famous T-Rex, was discovered, more than 400 dinosaur skeletons have been found here, representing over 55 individual species. No other area of comparable size anywhere has yielded such a large number and diversity of dinosaur fossils.

And of course, when you have such a rich diversity of dinosaur fossils, there has to be a museum. 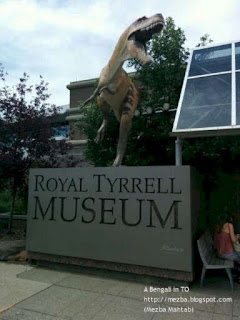 The Royal Tyrell Museum is a huge tourist draw (and the main draw of Drumheller). There's over 130,000 fossils here, and the museum is huge. 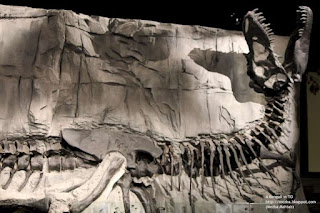 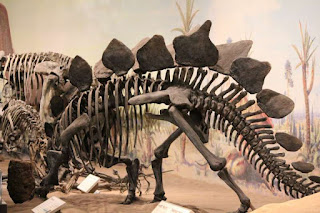 There's even perfectly preserved specimens of dinosaur eggs! The theme of the museum is a series of chronological galleries celebrating the 3.9-billion-year-history of life on Earth. 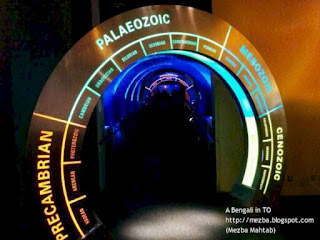 One of the most popular is "Dinosaur Hall", with over 40 mounted dinosaur skeletons, including specimens of the famous Tyrannosaurus Rex and Triceratops. 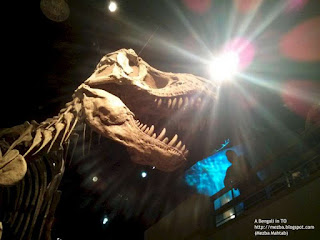 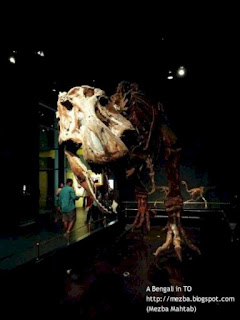 Of course the museum has an eye on modern mass entertainment, and you get to see the stars of the Ice Age movie series (well, their fossils). 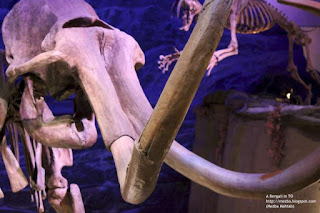 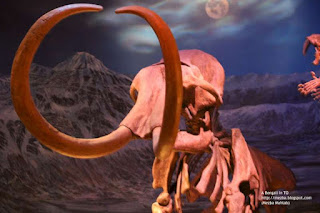 Why are there so many fossils? We took a guided tour, and our guide told us that the true draw of Dinosaur Provincial Park, however, was in the dirt.

Dinosaurs walked the Alberta Badlands during the Late Cretaceous Period (around 75 million years ago,) when the sub-tropical climate (in Canada!) nourished lush forests and great rivers that flowed east toward a warm inland sea. 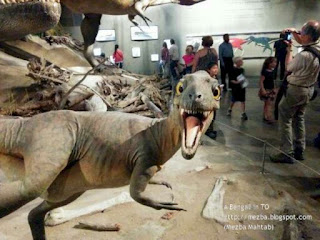 The environment provided homes for a variety of creatures big and small, including sharks, turtles and crocodiles. Reptiles with wingspans wider than a small plane soared across the skies. 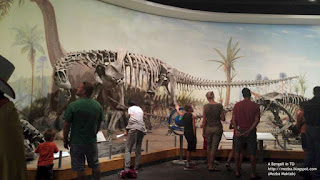 Those great rivers left behind the sand and mud deposits where dinosaur bones were quickly buried and then fossilized, and now form the hills and hoodoos of the Badlands. 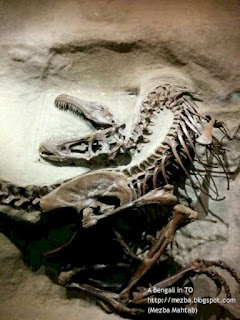 When the last ice age ended 13,000 years ago, water from melting ice carved the valley where the Red Deer River flows, helping to create perfect conditions for fossil preservation. 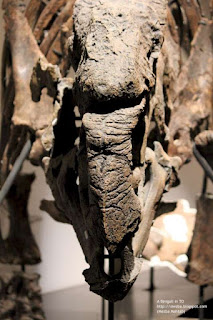 You can easily spend 4-5 hours here. There's all types of exhibits, even about Jurassic era plants and microbes. They have activities for kids (and families) to go fossil hunting in the nearby badlands. Kids loved the dinosaurs (in fact my four year old knew most of them, because of Harry And His Bucket Full of Dinosaurs). Who said TV wasn't educational?

You will see dinosaurs (well, models of them) all over Drumheller. 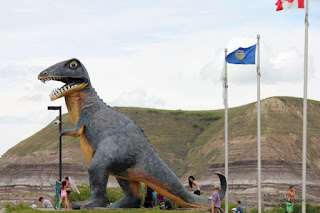 The other big attraction (and I mean big) of Drumheller is the World's Largest Dinosaur. 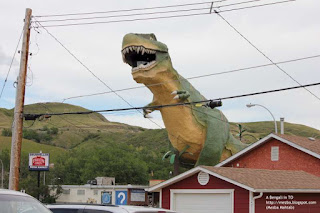 This is a giant model of a Tyrannosaurus Rex (even larger than the known sizes of an actual T-Rex, approximately 4.5 times larger). The height is 26.3m, and you can climb the 106 stairs (for a fee). 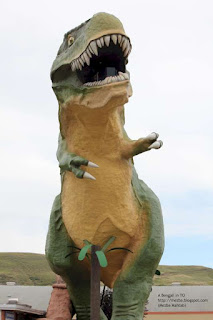 It's situated in a park (with water fountains and splash pads) with free parking nearby. By the way, having a giant model of something in the middle of a small Canadian town is an unusual but common Canadian tradition.

Drumheller is a day trip from Calgary. You start in the morning, explore the Royal Tyrell Museum, go to the World's Largest Dinosaur site (most people don't go up, usually), and if you have time go to the Atlas Coal Mine, and then head back to Calgary. When making an itinerary, Drumheller's a must on the trip.
Posted by mezba at 7:39 am