How Al Maghrib Blew It

It is the situation every organization dreads. Some important executive within the company, or a high profile representative, makes a misogynistic, sexist, crude joke and an indefensible statement. The resulting reaction then goes viral, dragging the company's name down with it. Pressure grows on the organization to do "something" and to clarify where they stand.

Or you try to hide and hope the situation blows away. You can issue a half non-apology or even fight back and defend the speaker, calling those who pointed out the rampant sexism and misogyny names and insults. There will be no sanction of your employee. It implicitly sends out a signal that such statements and jokes are appropriate, fit the company culture and that the criticism of your organization is actually correct.

Al Maghrib Institute, a widely respected association of sheikhs who teach Islamic courses throughout the world, found itself amidst such a dilemma on the weekend. Abu Eesa, one of their sheikhs, posted the following on twitter and Facebook. 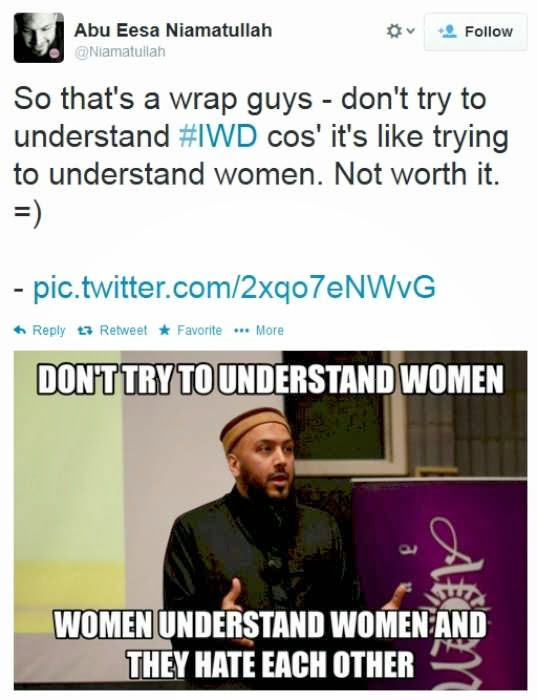 If this was a "joke﻿", it was retweeted by many of his followers. I thought at first someone pasted the photo of the sheikh as a false allegation - I was dumbfounded to see it was an actual post by him! And his twitter had a series of other posts. 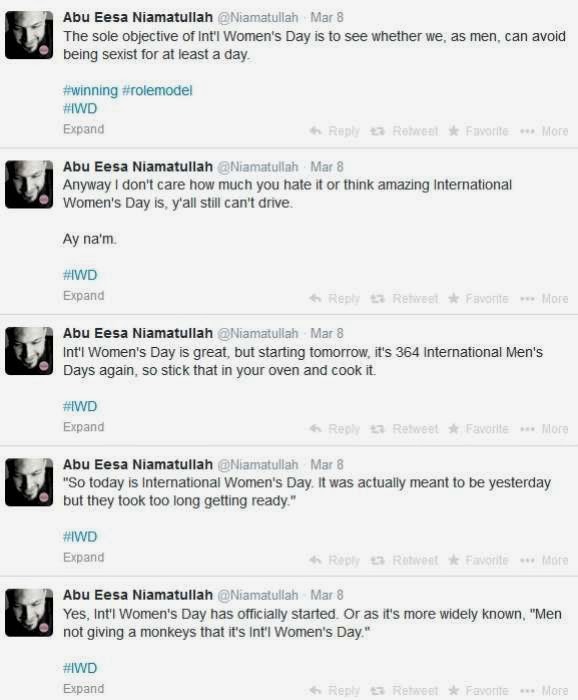 Joking about women was bad enough. The second twitter plays to the stereotype that women are bad drivers. The third one where talks about ""stick that in your oven and cook it"" is a dismissive mentality that some men have about women. These tweets were bad enough. However, a post soon surfaced about where he "jokes" about raping women. 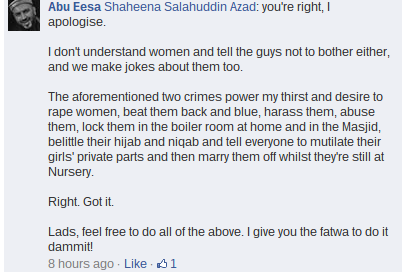 No matter what the context, you just can't joke about raping women! Especially, AS A SHEIKH and ISLAMIC SCHOLAR, you cannot be giving out fatwas lightly or in jest! AND especially fatwas that says go ahead and rape! (I am ignoring the disgusting FGM mention here).

Of course, women did not keep quiet. And neither did many men. And the resulting outrage resulted in even more non-apology posts by our "sheikh". 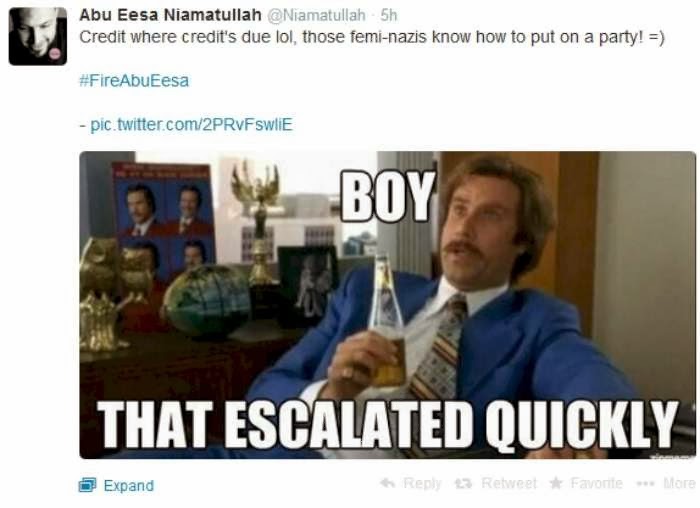 Now﻿ this was high time Al Maghrib stepped in. Sheikh Abu Eesa is part of Al Maghrib Institute and their good name was being sullied and dragged through the mud by association. For a long time, despite calls for a reaction, their twitter post remained silent. Ironically, the last post was actually a tweet about a Sheikh Abu Eesa course.

Yes, we now know that Al Maghrib celebrated International Women's Day by talking about Muslim women who are our role models. This could have been a good first step, but it's still talk. Sheikh Abu Eesa made fun of International Women's Day, which Al Maghrib purportedly respects. The important question remains: what about Sheikh Abu Eesa and his comments?
Sheikh Waleed Basyouni of Al Maghrib Institute then posted on facebook. 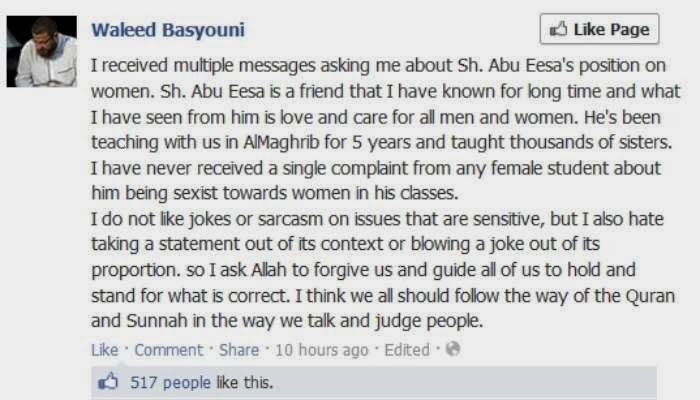 Instead, we saw the first signs of a fight back. He said he hates taking a statement out of context or blowing a joke out of proportion. Sorry sheikh, I respect your knowledge and your ilm, but even a man of limited knowledge like me understands that joking about raping women, female genital mutilation or stereotyping women is completely unacceptable. Had Sheikh Abu Eesa worked in any normal corporation in the West, these would be firing offenses.

And then Sheikh Yasir Qadhi, a sheikh whose knowledge I benefit greatly from, and whose seerah lectures are extremely detailed, posted an absolutely shocking facebook post. 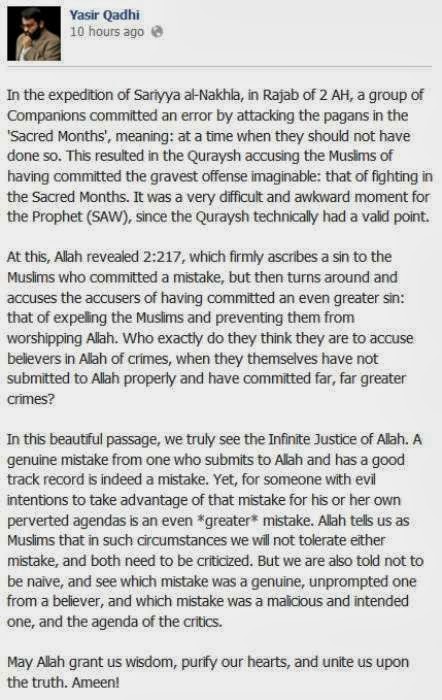 Note, there was no reference to Sheikh Abu Eesa or his comments or the whole fiasco in the post. I actually sent him a tweet asking him to clarify what he is talking about. With no response, and given the nature of his tweet, the timing, and his recent endorsement of Sheikh Abu Eesa's Syria fatwa, I can only assume this tweet (and Facebook post) is about the current situation. And therein lies the problem.

Sheikh Abu Eesa is compared to a Companion of the Prophet Muhammad (peace be upon him) who made a mistake, and those criticizing him are being compared to the enemies of Allah, the Quraish, who plotted to kill and assassinate the Prophet and wipe out the Muslims (i.e. a bigger mistake). So, if you found the tweets of Sheikh Abu Eesa misogynistic, sexist and offensive, guess what, you are an enemy of Allah. The Sheikh's sexists tweets - yes, they were bad, but you, by complaining about it, made a bigger faux pa and sin!

UPDATED: As of right now (1040 am Tuesday), there is still no post apologizing for his actions by either Sheikh Abu Eesa or Al Maghrib Institute. In fact, Sheikh Abu Eesa seems to have taken delight at the outrage and his non-apology post on facebook is amazingly even more vile.

This was a chance for Al Maghrib to demonstrate that such sexist and anti-women attitudes have no place in Islam and gets no encouragement from educated, Western scholars. Instead, they seem to have closed ranks to defend Sheikh Abu Eesa and call out anyone who finds his "jokes" offensive.

SOMETHING ABOUT ME: I am not what you would call a feminist. I am a guy who is of the opinion that a woman CANNOT lead prayers in a mixed congregation, and I do not think a non-mahram woman and a man should stand beside each other and pray. This is a classical, orthodox position held by the mainstream Muslim body. I think Amina Wadud is very much in the wrong. I agree completely with Allah's orders in the Quran regarding inheritance (of course, special circumstances can be evaluated by a reputed and learned scholar on a case-by-case basis). My post where I encourage Muslims to get married early by the age of 24 was hated by many feminists who called me (and my family) all types of names. I brush off their insults because a man calling to Allah's way will be insulted like Musa (pbuh) was insulted.

Yet. the truth is the truth, and the truth is that Sheikh Abu Eesa's statements crossed a line and he should have been sanctioned. I am not going to call for his firing and did not join the #fireAbuEesa hashtag because I don't like to knock a man's livelihood. He could have been given sensitivity training and taught the importance of moderating what you say as a public figure and a religious leader. Instead, I have been lumped into a "feminazi" camp by Sheikh Abu Eesa and a "Quraish" camp by Sheikh Yasir Qadhi and a "blown out of proportion" camp by Al Maghrib Institute while the sheikhs close ranks around one of their own and permit a frat boy mentality amongst the so-called premier religious educational institute in the West.

Such an act only harms Islam, ya shuyookh. Even a man of limited knowledge like me can see that, so why can't you all?


MORE LINKS ON THIS ISSUE:

He did not joke about rape. Please quote full discussion where he replied to an accusation:

Shaheena Salahuddin Azad Excuse me? Stronger than that? Explain that to the woman who is beaten black and blue, raped by her husband because 'IT IS HIS RIGHT', the women who get sexually assaulted/harassed just because they don't wear hijab, the child bride who is married off because it's ok, ITS SUNNAH! You might not think your 'joke' has any consequences but it does! You and the other few million men in this world that think it is ok to 'joke' about women's rights, YOU men are the problem. STOP joking and maybe, just maybe men might treat us with the respect that our creator bestowed on us from the start!
15 hours ago · Like · 24

I don't understand women and tell the guys not to bother either, and we make jokes about them too.

The aforementioned two crimes power my thirst and desire to rape women, beat them back and blue, harass them, abuse them, lock them in the boiler room at home and in the Masjid, belittle their hijab and niqab and tell everyone to mutilate their girls' private parts and then marry them off whilst they're still at Nursery.

Lads, feel free to do all of the above. I give you the fatwa to do it dammit!

Rahil, I fail to see how you are helping his case.

Thank you Mezba for highlighting this. It is very unfortunate for an institute like Al Maghrib to condone this kind of behavior from a scholar.

Thank you so much for this!!!

Thankyou for providing a balanced view. This has not blown out of proportion, I must add the tecent tweets that would be considered racist have not even been mentioned here. Are these really issues that we should be joking about? Did most people get jokes or sarcasm? Seriously? He's actually bought AlMaghrib into disrepute and even highlighted how blind others are. If he worked for any other organisation, incl Muslim-led, he would have been suspended pending normal procedure. This is extremely damaging for AlMaghrib.

Thank you for this Mezba, so nice to see a brother can identify why sisters were offended indeed you were just as offended. Much appreciated. I'm very saddened by Yasir Qadhi response, to not name names but post that its sort of cowardly and insulting to all really. JazakAllah khair once more this took honesty and guts.

I really respect that you have tried to be fair without going insane. May Allah guide and preserve you and all of us.

Allah only knows what is your intention of all these words..if you really care about what the shaykh has said you could have contacted him instead of making all these mess.people who know him understood his way of joking and their love and respect to him did not change with what you or anyone else who is using his words against him..wake up! instead of collecting pictures and wasting all these time to prove what that he is bad shaykh he said could've have separate the teaching of our beloved religion
Ps.I am a sister who attended his classes
ومازالت الكلاب تعوي والقافلة تسير

But "his way of joking" is not acceptable in Islam.

But, "his way of joking" isn't allowed in Islam, so as a defense, it fails.

@Anon, thanks. It is rather strange for Al Maghrib to condone this.

@Fozia, I agree. This is very damaging for them.

@Anon, Yasir Qadhi's response was very disappointing for me personally, given his wisdom and ilm.

@Anon, Never said he was a bad sheikh. He was a sheikh that made some bad jokes and should apologize for it.

@David, I cannot speak for that. Not enough knowledge on the fiqh of joking.

Have you read this?

the institute has posted a statement on their website, regarding ur concern. http://almaghrib.org/blog/2014/03/13/on-recent-remarks-of-an-instructor